More Korea references in the Simpsons 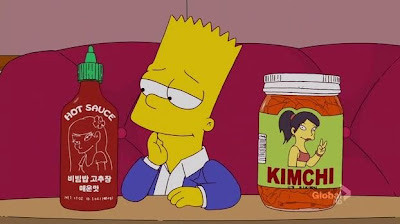 The hotties that he chills with...
On this week's Simpsons, Marge and the kids end up in an Ethiopian restaurant* after their car breaks down, and though skeptical, they love the food and, after meeting foodies, become food bloggers themselves. The foodies don't come off too well:

Of course, the Simpsons has taken on hipsters for a couple decades now, and that conversation pales in comparison to (and takes as a blueprint):
[Sarcastically] "That's cool."
"Are you being sarcastic?"
"I don't even know anymore."

It also pales in comparison to this evisceration of foodies (the responses are just as much fun).

At any rate, they end up hitting all kinds of restaurants, and make a trip to "K-town": 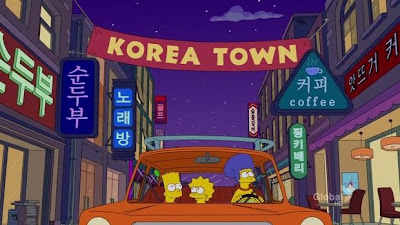 There's quite a bit of detail - comics, noraebang, video, pharmacy, galbi and even a golf place: 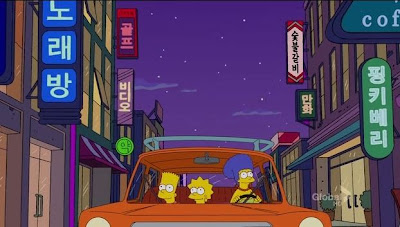 (Not being American, I knew nothing about Pinkberry)
One more step in the globalization of bibimbap and bulgogi, I guess....

*I've never come across an Ethiopian restaurant in Seoul. Has anyone ever seen/ been to one?
Posted by matt at 9:09 AM

I like the still shot of Bart with the Gochujang bottle.

But it looks similar to the Siracha hot sauce bottle found in Thai and Vietnamese restaurants around LA, don't you think?

(I still like the Golden Deli in San Gabriel. Wish I could be back in Pasadena.)

The only thing missing from the K-Town scene was two spinning barber poles.

Thanks for the write-up. Someone recommended this episode to me, but there's an eight-day delay on Hulu nowadays for programs on Fox.

I think there are a couple of Ethiopean restaurants in Itaewon...never been though.

I went to an African restaurant in Itaewon with my girlfriend a few months back. Not sure if it was specifically Ethiopian though. We couldn't read the menu or make out the pictures so we told the server to bring us something good. It wasn't all that tasty but it was an interesting experience. They also had African TV playing which I had never seen before.

I think if you go to the area around the Itaewon Mosque, you might find an Ethiopian restaurant.

As an aside, the area around the mosque seems to be desperately overlooked by so many people. It's definitely a cool change from the westernized atmosphere of the main Itaewon-ro.

I've been to a Nigerian restaurant in Itaewon that wasn't so hot. Never found an Ethiopian one.

FWIW, you'll know it's Ethiopian if you aren't given any silverware. You eat the food by picking it up with strips of bread, and it's always family style. Great stuff.