[Note: the episode files have been re-uploaded for those who couldn't get them.]

In the last post, I looked at the first third of the February 19, 2005 broadcast of the SBS 'investigative news program' 그것이 알고싶다 (I want to know that)'s episode about English Teachers, titled "Is Korea their Paradise? Report on the Real Conditions of Blond-haired, Blue-eyed Teachers." The show can be downloaded in a rar archive here (in four parts - 1, 2, 3, 4 - download them all and click on the first part to extract the file).

In the first third, we were shown how white English teachers are unqualified and only interested in partying with alcohol or drugs and having sex with Korean women, including their underage students.

This is followed by other stories of unfit foreign teachers told by foreigners speaking in English:


Sam (English Instructor): 'There was a Korean American guy who was supposed to sell hashish to high school students.'
- He was a hagwon teacher?
'Yes.'
-Two or three [students]?
'Well, he used the word students. That means more than one.'

Alex (English Instructor): "I don’t know how, but they met some underage girl and she was 16 years old and was in high school or something and he had sexual relations with her. Middle or high school. You need to, y'know, watch some foreign teachers. You should be careful."

Choi Su-yeon (former recruiter): 'One seemed like he had schizophrenia, a Canadian, and he got treatment and fled. Many marijuana addicts come. There were some with bad credit or who were bankrupt who came as well.'

Ryu Il-yun (Hagwon manager for 3 years): 'The only thing we can check is the person’s inflated resume. For example if there’s mental disorder or drug use maybe there’s a criminal record. It’s impossible to check.'
-Out of all foreign teachers, how many have proper qualifications?
'From what I’ve seen, 5%.'

The host then says there are teachers who are arrested for drugs, and it’s hard to know who is teaching our children and we should be concerned about the danger they may pose. Hagwons hire native speakers and bring them to Korea; what kind of experience do they have?

'Last December, police caught an American. He was working at a university.'

This story is related in this Korea Herald article:


The news last November of a foreign bellboy-turned-profesor who forged his degree spurred some universities to confirm the credentials of their staff. But still, it is easy for fake degrees to slip past, especially if an international phone call isn't made.

Hector Manuel Ramos, Jr. taught at Konkuk University in Seoul for two years until he was arrested by police on charges of forged documents. He worked as a bellhop in a New York hotel before he bought forged degrees in Thailand, one purporting to be from Columbia University and the other from Central Michigan University, according to police.

The arrested teacher was interviewed at the police station:
'The reason I can't work in America? It's fake. You know my evaluation? I have a 90% evaluation from students.'

Student: 'I'm surprised. How did he become a professor, and how did the school not know about it?'

It goes on to point out that he was a high school graduate who had worked as a bellboy and was also growing and smoking marijuana. 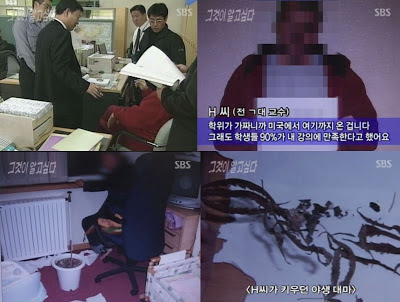 They then use the same foreign actor who previously molested little girls and slept with a high school girl to re-enact how the above teacher was able to do it. 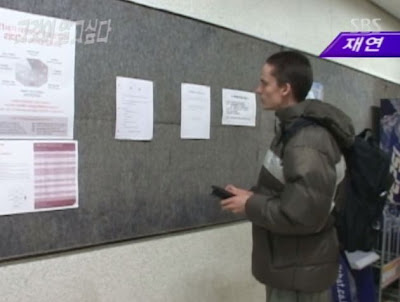 In the scenes where he’s interviewed by police at the police station, he not only smokes a cigarette – he also yells at them and carries on in what sounds to be fluent Korean. This is made clearer in this Yonhap article, which shows his fake PhD diploma which has 'Kim' as his last name, as opposed to his Masters diploma, which has a different surname. What's hilarious is that on the show, they censor out only the diploma with 'Kim' on it (at right, below):

A university official says that among foreigners coming to Korea not many try to be professors, and that people with a PhD, Americans, are extremely hard to find and are a resource, and are treated as valuable. 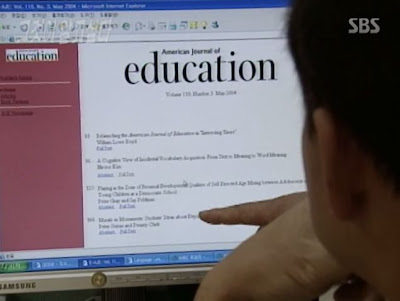 University official: 'His thesis was in a prestigious journal so we were very surprised, he didn't seem like a very deep person. He made 4 million won each time an article was published, 12 million in all. They didn't confirm his diploma because it would take too much effort, they usually depend on whether someone answers questions well or not.'

The host then says an E2 visa is needed which requires a 4 year university degree, but it's not easy to confirm degrees.

They then switch to the story of Robert, who we're told is an illegal English teacher working on a tourist visa.

He says, 'In Thailand they bought their degree. So, basically you say, "I'll have a degree in Law from Yale." And then they print it. And they came to Korea and got jobs on an E-2 visa. Online, it's easy to buy a degree.' [Emphasis added.]

Note that while he is clearly talking about someone else buying a fake degree, the subtitles make no such distinction, and make it appear that he's talking about himself. Which, again, raises doubts that he is what the host claims he is, an illegal teacher. 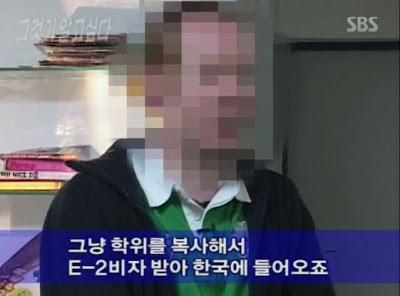 [Cue menacing music.] The host tells us that, in truth, you can easily buy a fake diploma on the internet and come to Korea on a tourist visa.

Robert: 'I can post my resume and photo and some information on the internet and within a day or two agencies will be calling me. They call all the time, almost every day.'

A recruiter talks about how teachers can go to a hagwon and meet the director and say they’re happy to work on a tourist visa. Others don’t use recruiters and do it this way and hide the fact they’re only working 3 months.

A former recruiter adds that hagwons might be onto those who come with fake diplomas, but with a year long contract in place, the need to hire a new teacher, and possible complaints from parents, they don’t let it out. If you’re white with blonde hair it just takes one resume posted online, and within a week they'll be contacted for jobs, especially if they're female.

A hagwon owner says that stress is put on appearance; preferences are for white, female, young teachers. 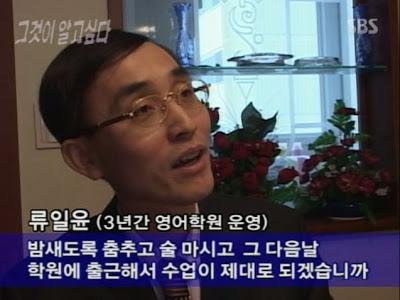 Ryu Il-yun, who has operated a hagwon for three years, asks how they can properly teach the next day if they go dancing and drink at night. They should come to Korea to teach children and put effort into preparing classes, 'but between you and me they never do.'

They interview a student who says that her foreign teacher doesn't know the difference between a noun and verb and that she has to look up stuff in the electronic dictionary to show the teacher. Her mother says mistakes are made even with the alphabet.

Choi Su-yeon, a former recruiter, says that most foreign instructors teach a lot of slang, which makes her feel embarrassed when she sees the class. They hold grammar books but make mistakes, and it's surprising. They don't know grammar, they really are that ignorant. The lecture in itself is funny.

Then they talk to an official from SMOE. Outside of periodic fact finding or crackdowns, there's no way to enforce [laws]. Asked why there's no crackdown, he says there aren't enough people. They only have 40 enforcement personnel to deal with 70 or 80,000 hagwons. 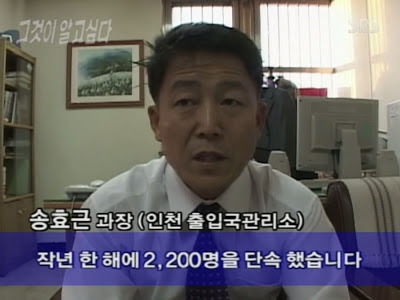 They they talk to Song Hyo-geun, head of Incheon Immigration office, who says that last year they caught 2,200 people.


- Among those people, were there many white people arrested, as opposed to southeast Asians?
'There really weren't many white people caught.'
- Last week two hagwon instructors were caught and deported. Currently there is one white person reported to be an illegal sojourner.

Our host returns to show the costs of hiring a foreign instructor:
1.5 million for recruiting fee, 2.5 for salary, 1.5 for return airfare, and housing and furniture is provided as well. This adds up to 40 million won per year.

This will lead into the last part of the show, in which such lenient attitudes towards foreign teachers, upon whom too much money is spent, are compared to attitudes towards migrant workers from third world countries.
Posted by matt at 7:45 PM

Great post - I can't wait to watch the show myself, especially the final installment. I've been thinking about the disjunction of migrant worker/foreign specialist for years, and I'm very curious to see what they're saying about it now.