Boxing had already seen its fair share of controversy at the 1988 Olympics, what with a New Zealand referee being attacked by a Korean coach and other boxing staff for 'favouring' and allowing a Bulgarian boxer to win, which led to an explosion of media-driven anti-Americanism as newspapers lashed out at NBC for daring to do what they paid hundreds of millions of dollars to do - televise the Olympics.

As the final boxing matches drew closer, controversy began to draw a little to closer to home, as a September 29 AP article published in Stars and Stripes noted:


Three South Korean fighters also won by decision, including a 3-2 win at 156 pounds by Park Si-hun over Vincenso Nardiello of ltaly.

The win so enraged the Italian fighter that he kicked the ringpost and then charged toward the official scoring desk near ringside. Nardiello had to be restrained by his coach from attacking the officials.

Korean fighters have won a string of close decisions in front of a highly partisan crowd at the Chamshil Student Gymnasium since several Korean officials attacked a referee last week after Korean fighters lost a pair of decisions.

The quarterfinal victories assured the fighters bronze medals at the worst going into the Thursday semifinals[.]

There was more than a bronze medal assured for Park. As the Guardian describes it,


The final, on the last day of boxing at the Games, was a rout, Jones, barely bothering to raise his guard, landed 86 punches to Park's 32. The Korean took two standing eight counts and was twice warned by the referee. NBC's Count-A-Punch recorder scored the rounds 20-3, 30-15 and 36-14 in Jones's favour. [...]

The three judges didn't think so. Bob Kasule of Uganda, Uruguay's Alberto Durán and Hiouad Larbi of Morocco gave Park the fight, two others giving it to Jones. As the referee, Aldo Leoni, raises Park's hand, the Korean fighter looks entirely embarrassed. Leoni himself looks disgusted. "I can't believe they're doing this to you," he whispered to the distraught American. 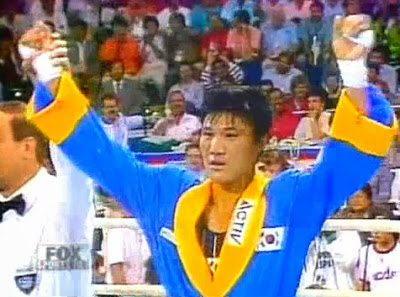 The Stars and Stripes article continues:


"It's the worst judging in boxing since I've been in it," said Elmo Adolph, an American referee and judge who has been in amateur boxing for 24 years. "I'm extremely disappointed almost to the point of being incensed."

Anwar Chowdhry, president of the International Amateur Boxing Association, said the scoring was bad and that it had been a frequent problem at other tournaments. With that, AIBA made Jones its most outstanding boxer of the Olympics.

"Outrageous," U.S. Coach Ken Adams declared. "He clearly won the bout. It's a political thing, and that's what's bad about it."

He would take things further than that (via another AP article in Stars and Stripes): 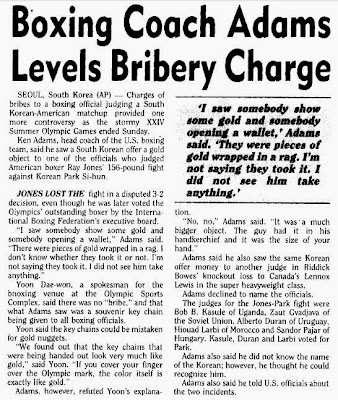 The other Stars and Stripes AP article continues:


"I thought I had beaten him to a point I couldn't get robbed," Jones said. "Unfortunately I was."

Jones' father,-Roy Sr., a former prize fighter, said his son was crushed by the decision. "I've never seen him shed a tear before and he was shedding tears," the father said. "It's every athlete's dream to win a gold medal, and they took it away from him."

The fight and its outcome is described here:

As the Guardian quotes Jones,


"When I had that problem in South Korea. I went with an interpreter to face the guy I fought," he said in 2004. "I asked him 'Did you win that fight?' He shook his head and said 'No'. And then I was cool with it. If you tell me the truth, I'm cool."

Well, he may have been cool with Park, who really wasn't responsible, but he certainly wasn't cool with what happened. Park did grab his hand during the medal ceremony - he clearly feels bad... 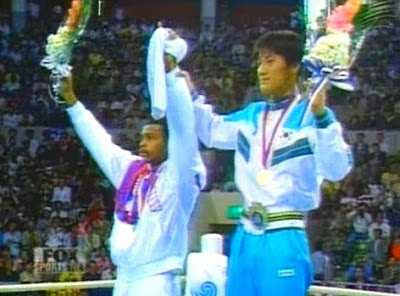 But it's pretty clear in the video of the medal ceremony how distraught Jones is.

The Stars and Stripes AP article did note that "Even some of the Koreans in the crowd booed when the decision was announced." In this documentary, it's said that "50 Korean monks arrived to personally express their shame and sorrow" to Jones, who said, "They were so sorry about what had happened to me and what their country did to me." In fact, the Hankyoreh published an article the next day titled "Korea's stained 'insisted-upon medal'" which stated that the paper had received many calls criticizing the result of the match, and apparently many had said that the medal should be returned. So while organizers might have been pushing for this kind of thing, it's clear that not everyone was buying it or thought that 'gold at any cost' was something to strive for.

Mind you, as the Stars and Stripes AP article points out, some were true believers:


Kim Seung-youn, who resigned Sunday as head of the Korean Amateur Boxing Federation over an earlier controversy, said, "Today's decision is very, very fair. There is no scandal today. It cannot happen. I cannot understand why foreigners have such prejudice against Korea."

That would be the boxing ring assault incident that he was finally resigning over. And yes, when coaches assault referees, it's the network showing it who is to blame, and when medals are stolen, such beliefs are due to "prejudice against Korea."

Or not. As the Orlando Sentinel reported,


For his 1996 book, The New Lords of the Rings, [Andrew] Jennings discovered police documents that offered the most damning evidence that bribes were made in Seoul. Records from the files of the Stasi -- the defunct East German secret police -- showed more than $15,000 changed hands among boxing officials in Seoul.

The the Guardian elaborates:


Karl-Heinz Wuhr, the general secretary of AIBA, was mixing his boxing duties with work as a Stasi agent. When the Stasi's secret files were released following the collapse of the Soviet Union the investigative journalist and author Andrew Jennings found allegations of outright bribery. "They did not miss a chance to try to corrupt or influence me," Wuhr wrote. "They [the host nation] repeatedly attempted to persuade me to take back my decisions punishing judges they seemed to have an interest in. There were always judges prepared to declare a South Korean boxer victor, even if this was completely ludicrous." He alleged bribes had been paid to several unnamed judges, including three from Africa and one from South America and felt the "manipulation" went high up into the executive of AIBA. The referee Leoni supported the claims, saying an Argentinian colleague had been offered an envelope stuffed with cash by the Korean boxing authorities.

Oh, and the icing on the case is this: 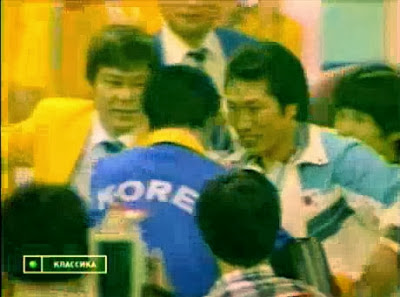 Recognize the man congratulating Park on his 'victory'? 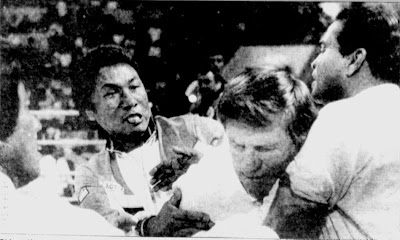 Well, yes, but as the LA Times reports:


After the melee, a seething AIBA president, Anwar Chowdhry of Pakistan, suspended five South Koreans for their role in the melee for the duration of the Olympics.

But nearly a week later, the South Korean Amateur Boxing Federation is largely ignoring Chowdhry's ban. Lee Heung Soo, the Korean coach-trainer who was suspended, has attended every South Korean bout since the riot, coaching from an arena floor-level seat or, as was the case Tuesday night, from the press section.

Although Lee no longer wears an Olympic credential, he has been seen daily in the restricted athletes' zone in the building, freely walking past security check points, and sitting in the arena's floor-level ticketed sections.

Lee also has been seen shouting instructions to boxers from the spectator seats, the press section, and escorting South Korean boxers to and from the arena.

Chowdhry was asked if he had been aware that Lee was still coaching the South Korean boxers.

"That was brought to my attention, and I gave a written directive to SLOOC, asking that the credentials be pulled from all five of the people we suspended," he said. "I am unhappy that those people are even in this building."

The next day, however, Lee was still acting very much like a coach.

And the South Korean boxing federation has yet to issue a public apology for the incident. Kim Seung Youn made a clumsy attempt to do so several days ago. He had about 150 gift boxes passed out to reporters. The boxes, with his name on them, contained after-shave and skin lotion, a razor and two blades.

Of the failure of the South Koreans to apologize publicly for the melee, Chowdhry said: "That has surprised me more than anything, that they have said nothing. All they have done is to assure me there will be a police investigation, after the Olympics."

Well, yes, there's a certain irony in 'the side that demand apologies' not making them, but when you're morally in the right, there's no need to apologize. So I guess the Donga Ilbo's assertion that the Olympics were Korea's way of showing its "moral and ethical supremacy" turned out to be correct. Because when you're morally and ethically supreme, you never need to say your sorry, because it's someone else's fault. The problem is, while being the eternal victim (of 'prejudice' in this case) gives you the moral high ground, it doesn't give you any agency, which leaves nationalists in a bit of a confusing situation. The way out of that will be the topic of the final post in this series (or posts, who knows how long it might get!).
Posted by matt at 10:57 PM

Who knew Korean boxing had its own Affirmative Action program?

Speaking of Korean corruption and the Olympics, the 2018 Winter Olympics in Pyeonchang already seem to have gotten off to a quick start. From a 30 November 2012 story in the tech-news site The Verge:

"Lee Kun-hee resigned from Samsung in 2008 after being indicted and found guilty of embezzlement and tax evasion in Samsung's infamous slush funds scandal. Kim Yong-chul alleged that the company had a 200 billion won (roughly $200 million) budget for bribing prosecutors and politicians into turning a blind eye to its legal misconduct. Despite prosecutors seeking seven years in jail with a fine of 350 billion won ($350 million), Lee was handed a suspended three-year sentence and fined just 110 billion won ($100 million) — a relative pittance for the world's 106th richest man. Months later, South Korean president Lee Myung-bak gave Lee Kun-hee a second personal pardon so that he could remain on the International Olympic Committee; the Samsung chairman went on to lead a successful bid to host the 2018 Winter Olympics in Pyeonchang. Amidst widespread criticism that the incident highlighted the favorable treatment given to corrupt chaebol executives, Lee returned as Samsung Electronics chairman the following year."

So the Korean president pardons a convicted felon so that he can make sure the country wins its bid for the Winter Olympics. Gee, I wonder how that happened? 2018 is sure to be as pure as Kangwon's driven snow!

sad thing is despite all the proof that fix was in, the IOC still recognizes the result and wont give Jones the gold medal he deserves

"sad thing is despite all the proof that fix was in, the IOC still recognizes the result and wont give Jones the gold medal he deserves"

Why are you so surprised? Google "IOC" and "corruption" and see how many hits you get: It's literally in the millions, and in more ways than one.

The IOC is simply a disgrace, end of story.

The only stolen gold is the one taken from Ben Johnson, the true 'fastest man on Earth.' The whole field was on drugs. Give it back.

I dunno. I thought Apollo Ohno was payback in kind.

"I dunno. I thought Apollo Ohno was payback in kind."

The ref who made the call against Kim Dong-Sung was an Aussie, James Hewish. Are you suggesting that the Americans paid him off somehow? Just curious.

They didn't have to pay that ref to throw the race to Ohno.