Ever since NBC's coverage of the boxing incident, the Korean media had been castigating NBC, and after American swimmers were caught stealing a lion statue from a hotel, this negative media coverage extended to any perceived infractions by any Americans in Korea. By that point, even politicians were starting to jump on the bandwagon. As one Donga Ilbo article (in this post) noted on September 26,


A prominent member of Korea's ruling Democratic Justice Party expressed regret at NBC's coverage, warning that "If NBC continues with its distorted reports about Korea, it will further inflame the anti-American sentiment already spreading among the Korean people."

Three days later, a report by the LA Times on the swimmers included this:


On Wednesday, a leading South Korean opposition politician added his voice to the rising criticism of Americans after another U.S. athlete was arrested in an altercation with a Korean taxi driver.

Kim Young Sam, president of the Reunification Democratic Party, said conduct by American athletes here have given the Korean people the impression that Americans "ignore the feelings of Koreans or look down upon them."

Citing the undisciplined march into the Olympic Stadium by the U.S. delegation during the opening ceremony Sept. 17 and a series of altercations between Americans and Koreans since then, Kim said "there can be ebbs and flows in friendship," and declared: "We are in an ebb now."

"In the past, incidents (such as the ones that have occurred) would not even have been reported because of our comradeship," said Kim, who finished second in a four-way presidential election last December. "But those days are gone."

South Korea, he predicted, "will emerge from the Olympics as a nation too significant to ignore in the international arena."

"The United States should recognize Korea as an equal partner," he said.

"I don't know why, but Americans seem to be neglecting Korean feelings too much," he said.

By September 29 - the day that LA Times article was published - it had become clear to the government that things were going too far. President Roh Tae-woo even went so far as to go to the Olympic main press center and shake hands with foreign reporters (from the Korea Herald): 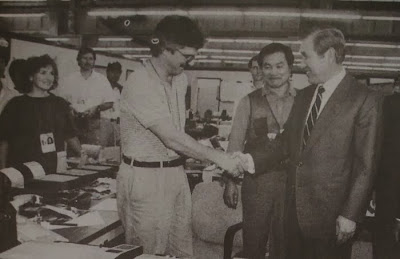 As AP reported that day,


President Roh Tae-woo said today that the news media of South Korea and the United States should show restraint and avoid reports that may provoke the sentiments of their people.

Roh made the remarks after receiving a briefing on growing anti-U.S. sentiment in South Korea during the Olympics now under way in Seoul.

"The news media of the two countries now should report in a way not to provoke the sentiments of each other's people," Roh said during a visit to the main Olympic press center.

"Even if the reports of NBC included something that hurt our self-esteem, we should put up with it, since most of the network's reports were affimative," he said.

Prime Minister Lee Hyun-jae also took up the issue today and said, "We should not let one-time feelings damage the traditionally friendly relations between the United States and our nation."

South Koreans enthusiastically backed the Soviet Union in its victorious semifinal basketball match with the United States on Wednesday.

Governing party officials said the Soviet Union, which has no diplomatic relations with Seoul, appeared to have won the favor of the South Korean people with extensive cultural programs even before the Olympic Games opened Sept. 17.

In an elaborate approach to South Korea, the Soviet Union sent to Seoul the a Bolshoi ballet contingent, a philharmonic orchestra and two choir groups plus a sports photo exhibition.

These overtures would eventually lead to increased trade followed by diplomatic relations being opened between Korea and Russia three years later, and as this AP article noted,


In an unusual move, the Seoul government, eager to establish relations with East bloc countries, has announced it will not grant political asylum to any athletes who seek to defect.

On September 30 the Korea Herald published the following article which featured interviews with the heads of the political parties, including future presidents Kim Young-sam and Kim Dae-jung: 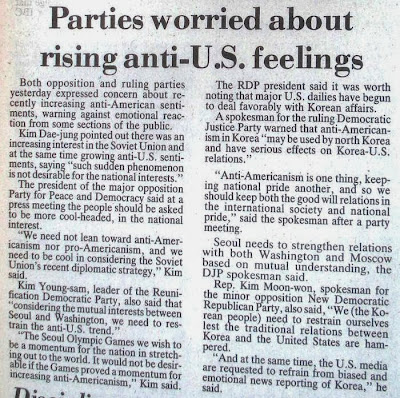 There are some choice quotations above that will be discussed in a concluding post (though there are still a few more to come before that). Needless to say, this media-led wave of grievance felt against the US must have seemed something that would fade quickly, but when it didn't, politicians and the government felt the need to try to put a stop to it. What they didn't understand was that this kind of unleashing of pent-up resentment against 'unfair treatment' by the US was going to become both a mainstream attitude and a fixture of politics in South Korea in the future.
Posted by matt at 4:46 PM

You have to admit that it's kind of brilliant how the Korean media managed to completely turn around the shocking mob attack on the Kiwi referee and somehow blame NBC for just about the whole damn thing. That's some classic PR spin right there, for sure.

As for this quote by Roh Tae-woo: "The news media of the two countries now should report in a way not to provoke the sentiments of each other's people." Is there any evidence that Joe Bag o' Donuts back home in the US even gave a fuck about all this? More classic Korean projection, I'd say.