News on the CERD case

Joe Amon, the director of the Health Division at Human Rights Watch, wrote an interesting article published yesterday in the Diplomat which reveals some information about the CERD case.


A year ago, [...] at the 19th International AIDS Conference [...] the Republic of South Korea co-hosted a session with UNAIDS on the issue [of HIV travel restrictions]. Kim Bong-hyun, deputy minister for multilateral and global affairs, in the Foreign Affairs and Trade Ministry acknowledged that discrimination based upon HIV status violated human rights and announced: “I am pleased to state, on behalf of my government, that the Republic of Korea has no HIV-specific travel restrictions under the Immigration Control Act and its implementing regulations. Lifting travel restrictions is a small step on our long journey to realize a society where there is no discrimination against people with HIV.” [...]

Not everyone is buying the double-talk. Just before last year’s AIDS conference, the UN committee that monitors the International Convention on the Elimination of All Forms of Racial Discrimination accepted a complaint against South Korea’s mandatory HIV tests for foreign teachers. The complaint says the requirement is racial discrimination, plain and simple. The committee gave the government three months to respond. Nearly a year later, in April, the government finally did.

The government neither denied that foreign teachers face mandatory HIV tests nor claimed the tests were necessary for public health reasons. In fact, it said nothing about the testing of foreign teachers upon entry, and countered that Education Ministry guidelines no longer require re-testing upon renewal of annual contracts.

This evasive, and incomplete, response is in stark contrast to the promises made about lifting all travel restrictions.

Do read the rest of the article. It should also be noted that South Korea's hoodwinking of UNAIDS still stands - it continues to be listed as one of 133 countries which "have no HIV-specific restriction on entry, stay and residence" (see here (pdf)), something which the results of this survey should make clear isn't true at all (click to enlarge): 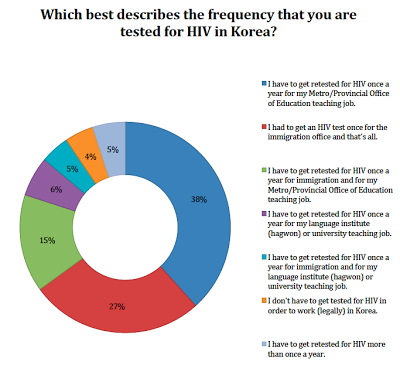 I've been told that data from that survey was used in the teacher's reply to the ROK's tardy response, but as I mentioned before,


Even if Korea were to submit a response tomorrow, due to a number of older cases awaiting consideration, the Committee won't be placing it on the agenda of their next session in August, and I'm not certain when the next session is.

In point of fact, the ROK did reply day after I wrote that, so the same caveats stand. It's all in the Committee's hands now, though, and hopefully we'll have an answer before the year is out.
Posted by matt at 10:49 PM

Thank you again for reminding me why I left Korea.