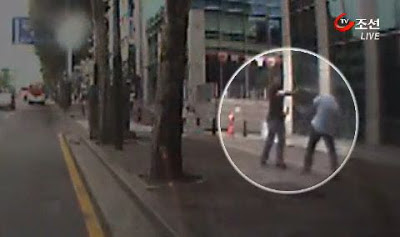 TV Chosun broadcast the following report yesterday morning, where you can watch the video from which the above image was taken:


Yesterday [May 28] in the middle of Gangnam police caught an American who sprayed a taxi driver with mace after not paying his taxi fare and then brandished a weapon when confronted by police. [...]

Yesterday morning in Dogok-dong in Seoul, a foreign customer refused to pay his taxi fare and fled, and after a lengthy confrontation the customer sprayed the driver with mace and escaped.

In addition to this, the foreigner, who has been identified as a 31-year-old American English instructor, also brandished a weapon in front of the 22 year old police conscript who witnessed what happened and who was taking him to the police station in a squad car. The Suseo police station has applied for an arrest warrant.

Mace? Seriously? I'd imagine between not paying fare, macing someone, and threatening a police officer that there might be some stiff consequences. Or not. One wonders if they will stop at compensation or go further.

And in other news, this morning Yonhap published the following report:

On May 30, the Gwangju Prosecutors' Office indicted K, a 25 year-old American, for bringing into Korea and smoking marijuana (in contravention of the Marijuana Control Act).

K has been charged with smoking marijuana in his house twice in February.

The investigation found that K smuggled marijuana on two occasions (3 grams and 9.5 grams) via a friend in the US.

It was found that K's friend put a plastic bag of marijuana in a jar of peanut butter and sent it via international mail.

K works as an English instructor in a Gwangju foreign language hagwon.

Smuggling pot in peanut butter! What a brilliant idea! No one has ever thought of doing that before, right?

The Gwangju Ilbo reports, in an article titled "Foreign instructor arrested... taught English while high" (a 'fact' routinely reported, regardless of proof), the teacher was from Kentucky and, after finding success in receiving 3 grams in peanut butter on January 31, tried again with 9 grams on May 10 and was caught by customs.
Posted by matt at 4:56 PM

The guy's body language is really weird before he sprays him. He like bends over a bit.
That is some really weird dude.
Also, since when did taxis start having cameras spying on everyone? How is that legal?

He looks like he's bowing.. kind of telling the guy to get away from him, and it's his dashboard camera.the majority of cars have those for accident insurance.

Man, what is it with messed-up English teachers from Kentucky lately?