On May 5 the Kukmin Ilbo published the following editorial:

It's been revealed that an American male wanted for sexual assaulting a minor several times in the US has been working in our country as a native speaking instructor in places like elementary schools for nine whole years. This man isn't known to have committed any other crimes here in Korea and has been deported to the United States, but parents have not been able to conceal their anxiety. This is because a loophole in a system of hiring native speaking instructors which is unable to filter out criminals has been exposed yet again.

However, the verification system is incredibly lax. Criminal record checks only include final verdicts, and the fact that someone is wanted for a crime is not included. If a foreigner commits a serious crime such as rape or murder and flees to Korea and works as a native speaking instructor, there is no way to determine this. As well, the health certificate only includes the results of a urine and blood test, tests which can only detect drug use within the previous two weeks. Drug crimes by native speaking instructors are endlessly occurring, but since information is not exchanged between law enforcement agencies and education authorities, effective management of foreign instructors is lacking.

First off, the 'Act on the Establishment and Operation of Hagwons' was amended in 2011, not 2010. The writer seems to have run with the mistaken assertion seen in all of the other articles about this case that criminal record checks were introduced in 2010 (instead of 2007, after Christopher Paul Neil's arrest) and conflated it with the Hagwon Law revision.

It then brings up the problem that "criminal record checks only include final verdicts, and the fact that someone is wanted for a crime is not included." Considering how conducive Korea has been to responding to the CERD (seven months overdue come Friday), I'm sure a polite word to the FBI would get them to waive that whole 'innocent until proven guilty' basis of the American legal system to make Korean journalists happy.

We're then told that the drug tests foreign teachers get "can only detect drug use within the previous two weeks." This was first mentioned after the arrest for drugs of four foreign teachers in Busan in June last year, and another arrest in July was followed by a media chorus demanding random tests or hair tests for foreign teachers. Thankfully, though police were 'quoted' saying that there should be such tests, a Ministry of Justice official was quoted saying, "To have periodic tests without evidence simply because of the risk is an excessive regulation."

Of course, the Kukmin Ilbo seems to be suggesting that such tests might be necessary because "drug crimes by native speaking instructors are endlessly occurring." I'm not sure how they define 'endlessly,' but the last drug arrest that was reported (and I think it would be pretty rare that an arrest of an English teacher wouldn’t be reported) was almost 7 months ago. Endless! The Gyeongnam Sinmun even published a cartoon about that arrest (for eating pot cookies): 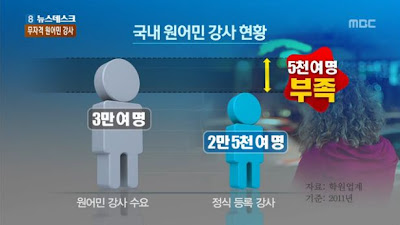 The editorial says there are around 20,000 rather than 25,000, however. Perhaps they are using their own statistics. The Kukmin Ilbo has also reported on ‘unregistered’ instructors before, applying that label to both Korean and foreign hagwon instructors. The difference in the reports was striking, however, as it described in a neutral way Korean instructors doing something that was ‘illegal’ in an administrative sense, while the foreign instructors in such a position were introduced with "Drugs and molestation by native speaking instructors in hagwons are never ending."

One can only imagine the demands that would be made upon the government if it could exercise full sovereignty over US soldiers. Since they can't, similarly blue-eyed, blond-haired teachers are a fair substitute target, I suppose.
Posted by matt at 4:08 PM