On February 7, 2005, the Korea Herald published the following article:

Some foreigners boasted of their sexual experiences with Korean women and made fun of Korean culture on the message board of a job-recruiting Web site called English Spectrum last month, and a group of angry Korean netizens launched an online campaign to "expel low-quality foreign teachers." Then, Gyeonggi police caught 47 foreigners who were illegally teaching English since all they had were tourist visas and no permission to work. In addition, some were only high-school graduates who language institute directors had passed off as having university degrees. Both incidents highlighted flaws in the hiring of English teachers - mainly a lack of reference checks and any laws to enforce regulations.

"Most teachers are surprised that there are no background checks - that you're not a pedophile or have a criminal record," said British instructor Keith Masey, who works for an English-language institute in Seoul. "A letter of relief is needed to move from one institute to another before a contract expires, but most hagwons do not check," an official of the foreign language institutes' council, which has 215 member institutes, said on condition of anonymity.

The law says that hagwons can be fined at least 100,000 won if they do not do the necessary paper work reporting a change of employment to the immigration authorities. A former recruiter who identified herself only by her first name, Jennifer, said, "Although instructors may have been sacked for some reason, they can work for another institute without a reference check." Jennifer taught English to elementary school children at high-profile English institutes - YBM and ECC - for five years and did recruiting of English instructors for two years in the Gangnam area.

She said some foreigners come back to South Korea a few weeks after breaking contracts and start working again. "It isn't like crimes that are left as a record," she commented.

Under the immigration law, a person can start over with a new E-2 visa in another workplace after the previous work visa becomes null. "Some instructors do not have English as their mother tongue," Jennifer said. "I had a colleague who was from Quebec, Canada, and his English was too bad to be true." But the Education Ministry does not have much control over the quality of foreign instructors. It said that the law does not require institute directors to check the background of instructors.

"It is up to hagwon directors to decide whom to employ," ministry official Kim Young-joonn said. "If foreign instructors cause big social problems, we may consider taking action, but there haven`t been any such issue." An English education boom in 1997 caused a sudden influx of foreigners eager to teach, and at one time there were an estimated 20,000 unqualified foreign instructors. Now, according to the Education Ministry, there are about 7,000 foreign instructors in Korea.

In 1997, many hundreds of foreigners holding only tourist visas were found to be teaching English illegally, highlighting the problem of unqualified English instructors. The Education Ministry hurriedly revised the law to require language institutes to employ only college graduates. Prior to that, any foreigner who had taken an English-related course at a college was able to find a job as an English instructor. Despite the law, however, some foreigners still find work as instructors even though they may not meet even the minimum qualifications. Jennifer said it is "an open secret" that many foreign tourists make as much as 40,000 to 50,000 won an hour by doing illegal private tutoring.

"The problem lies not in that they have illegal status but that they are not responsible." she said.

Another Korean-American English instructor, who asked to be identified only as M and teaches English at an institute in Gangnam, voiced concern about fake degrees. "My close friend told me her roommate (who teaches) is only a high school graduate," she said.

Last November, Hector Manuel Ramos, Jr., a former professor of Konkuk University was arrested by police on charges of using forged documents. Ramos worked as a bellhop in a New York hotel before he bought fake degrees in Thailand - one purporting to be from Columbia University in New York and the other from Central Michigan University, according to police. "You can tell (whether he is a college graduate) by listening to him talk. A university graduate is different in behavior, talking, and teaching," said M.

It is not hard to get away with fake degrees because government authorities do not usually check the authenticity of papers.

To close the loophole, major institutes like Pagoda give written tests and interviews to job applicants, but M believes some offenders may have slipped through the cracks into even large-scale institutes. Many English-language institute owners also welcome foreigners, regardless of qualifications, in order to attract students and high fees.

"The problem is with the people, Koreans, who run the industry. It`s pathetic to blame the foreigners," said Masey. "Institute directors like to recruit a person who is young and handsome," said M.

"Even a small institute tries to have at least one foreigner because it has great publicity effects," Jennifer said. "Korean parents are crazy about English. They often offer home-stay positions. They will plead with a foreigner to 'just stay at my home for free.'" M said, "My Canadian friend told me that even a person who is nothing in his country can be treated like a king in Korea as a foreign instructor. The government seems to have no idea of how to import (good teachers) and to control their quality." She suggested background checks, as is required in the United States, to ensure teachers are qualified. "It just costs 100 dollars in the U.S." to do a check, she noted.

One former instructor of the Samyook Language School said, "Many teachers are impeccable in their personality and enthusiasm, but I think students suffer as long as there are no firm standards." And, as Masey said, "The whole industry needs tightening up."

Other than requiring transcripts for E-2 visas - a measure added in the aftermath of the English Spectrum incident - there would be no tightening up until two and a half years later. This was also interesting:

An English education boom in 1997 caused a sudden influx of foreigners eager to teach, and at one time there were an estimated 20,000 unqualified foreign instructors. Now, according to the Education Ministry, there are about 7,000 foreign instructors in Korea.

The boom and influx predated 1997, and by the end of that year, when the economic crisis hit, hundreds of teachers would leave, with levels picking up again only a few years later. It's also amusing that the Education Ministry was answering questions that should have been answered by the Ministry of Justice.

There are a few more articles to post in this series before its climax with the broadcast of the SBS 'news' piece on the evils of blue-eyed, blonde haired foreign teachers. 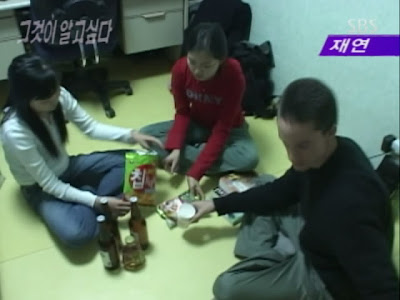 I won't be getting to those this week, but hopefully before too long.