So, Psy's Gangnam Style has taken off like a rocket - currently the #1 music video on Youtube with 73 million hits (wasn't it just over 50 million a day or two ago?) - which has led to appearances at football games in the U.S. and interviews on U.S. television (there more links to articles at that last link) and attempts to figure out what it all means (on blogs such as here and here, or even in the Atlantic), as well as parodies (this one by foreign students in Jeonju (via Korea Beat) earned the appreciation of one Korean commenter for the 'fleshy' foreign women in it).

The song and video are huge in Korea as well, though it's not the first time Psy has scored a major hit here - in late 2002 and 2003, his song Champion was everywhere, notable for its 'Beverly Hills Cop' theme sample and catching the zeitgeist after Korea did so well in the World Cup (and perhaps after the release of the film Champion, as well).

(I bought the cd at the time and was impressed; as someone who was neither a fan of Kpop nor not much of hip-hop listener, I thought about half of the songs on the album were good, with four being great.)

To find the first Korean stars to make it big in the US, you'd have to go back over 50 years to the debut of the Kim Sisters. The trailer to an upcoming documentary about the Kim Sisters can be seen here (do go watch it). They started out performing for U.S. soldiers at U.S. bases during the Korean war and in 1959 a promoter booked them at the Thunderbird Hotel in Las Vegas, where their career took off and led to 22 performances on the Ed Sullivan Show, a story I first heard from Mark Russell. 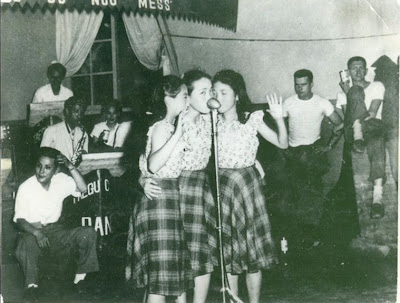 As it turns out, the sisters' parents were both musicians who participated in two different variety show collectives which performed from the 1930s to the 1950s and at times entertained Japanese and U.S. troops. An in-depth look at the history of these collectives, and the early history of the Kim Sisters, can be found in Roald Maliangkay's essay "Koreans Performing for Foreign Troops: The Occidentalism of the C.P.C. and K.P.K." It also contains contemporary video of performances, and makes clear the effects of anti-communism upon the Kim Sisters' family due to their father, Kim Haesong, being made to perform for the North Koreans during the war (during which he died after having been taken north). Their mother, Lee Nan-young, is best known for the trot classic "Tears of Mokpo" (this performance by her is likely from the early 1960s):

(I first heard this song as remixed by Dalparan over the credits of the film Resurrection of the Little Match Girl, the soundtrack of which was pretty much the only good thing about the movie other than this scene))

Hopefully we'll get to see the documentary about them before too long.

It's not football it's soccer :)