On January 7, 1988, the Korea Times published the following letter by a long-term expat: 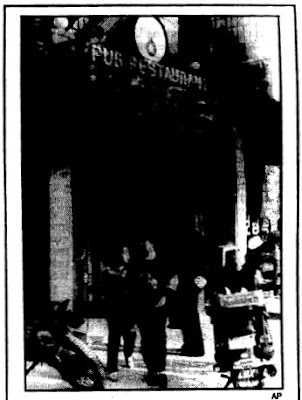 The German Embassy has raised a fuss over this beer hall,
called Hitler, near Seoul, South Korea.
'Hitler' pub draws protest from Germans

SEOUL, South Korea (AP) - The German Embassy is asking the government to force a popular new beer hall called Hitler to change its name and get rid of its blinking name signs and Hitler matchbooks and pictures.

The embassy also wants the beer hall to get rid of a Federal Republic of Germany flag that has a Nazi swastika stitched onto it. The embassy said the beer hall is defaming a national emblem.

"We consider the use of Nazi pictures and symbols as hurting ... German feelings and detrimental to our reputation," embassy spokeswoman Martina Nibbeling-Wriessnig said Tuesday.

The use of Nazi symbols is illegal in Germany, which has sought to repudiate dictator Adolf Hitler, who ruled from 1933 until near the end of World War II in 1945. The swastika was used as a Nazi emblem.

In 1987, a bar called Gestapo in Itaewon near a sprawling U.S. Army base changed its name after complaints by the German Embassy. The Gestapo was Hitler's secret police.

His namesake beer hall, which seats 100 customers, opened about two months ago in Kwangmyong City, an industrial area about 12 miles southwest of Seoul. The embassy said it only recently discovered it.

Interesting that, despite a foreign embassy complaining, Hitler bars continued to appear throughout the country until at least the mid-2000s (some photos are in the Metropolitician post here). And that in 2007 Rhie Won-bok could refer to the 'fact' that the Jews run America (as detailed in his comic book about America) as 'common knowledge.' And that a year later a cosmetic company would run a commercial (viewable here) mentioning Hitler.

Even more interesting might be that Yi Pom Sok, South Korea's first prime minister and minister of defense (who the Metropolitician mentions in his post), told an American journalist in 1946 that one of the things he planned to teach at his school to train anti-communist youth group leaders - which was funded by the US government - was "the history of the Hitler Jugend." A story for another day, I suppose.

Update:
The most recent article about a Hitler bar was from 2007, though no photos were shown. As that ROK drop post mentions, in 2000 Time did an article about a Hitler bar (one of three said to be in Seoul at the time) which had changed its name after complaints from the Third Reich to the Fifth Reich (the main attraction of the Nazis? "They dressed well."). That same year Pusanweb interviewed the owner of a Hitler bar in Busan who eventually changed the name to Ddolf Ditler (it's long since gone); the owner made clear he meant no offense. In 2005 photos of the interior of a Hitler bar in Daejeon were posted at this blog, and another photo of it was gathered with photos of a few other bars in this posting (links can be found in this post). It's entirely possible that they disappeared by 2007. To be sure, with around 25,000 foreign English teachers spread throughout the country, if such bars still existed they would probably be pretty well documented by this point.
Posted by matt at 3:22 PM