Update: Here's a shot of the jumping spot: 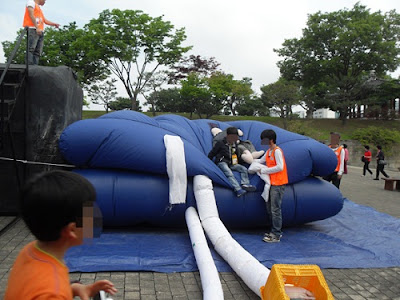 It seems the experience is not reserved only for girls: 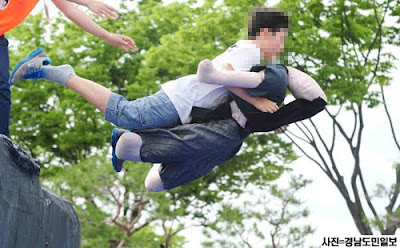 Via a post by Yuna at the Marmot's Hole comes the story of netizen uproar over an activity at the Jinju Nongae Festival, further explained by the Korea Times:

Organizers of Jinju Nongae Festival, held last weekend in Jinju, South Gyeongsang Province, organized the event as part of the festival which commemorates Nongae, a gisaeng (Korean courtesan) during the Joseon Kingdom (1392-1910).

During the Japanese invasion of Joseon in 1593, Nongae lured a Japanese general to a cliff and threw herself into the Nam River below while holding the general tight in her arms, causing both of them to drown. People in the region have honored her as a patriotic martyr, holding festivals since 2002.

In the event named “Experience of Nongae’s Sacrifice,” visitors were encouraged to jump off an artificial cliff, while holding a dummy dressed like a Japanese soldier, onto an air mattress 1 meter below.

Not only adults but also about 600 children took part in the event, according to the organizer. 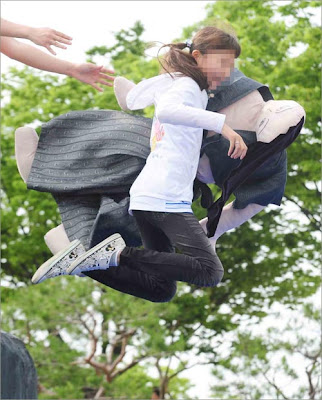 Wheeee! From here, via the Marmot's Hole.
I was going to say that I thought it was great that the festival was trying to make history come alive for children, but that they had taken things in a pretty tasteless direction, but... adults took part in this? That adults took part might be more shocking than the involvement of children. Might be, but not really. More anti-Japanese indoctrination (hating Japan is fun, kids! A few more years of this and you'll be ready for bayonet practice in Myeong-dong!) while providing possible solutions to poor test scores.

Not that a Jinju City official quoted in the article thinks that there's a problem with the event, however (though there will be a review over whether or not to continue it at next year’s festival):

Regarding the criticism [by netizens] that it is a “suicide experience,” [the official] said it is a “martyrdom experience.”

“Jumping off a cliff is an important factor of the festival as that’s what Nongae did. If the jump event is seen as a suicide experience, survival games should be seen as a war experience and the government should ban them,” the official said.

An intelligent and well thought out answer. Jinju (which is a nice place to visit, especially for the old fortress overlooking the river (which is likely where the festival is held)) is not so far from Masan, which passed an ordinance in 2005 declaring June 19 to be Daema-do Day (the anniversary of a Korean invasion of the Japanese island of Tsushima in 1419 (which is odd, of course, for a country which has never attacked anyone)). Daema-do is the Korean name for Tsushima, and the ordinance was a tit for tat for Japan's Shimano prefecture declaring Takeshima Day on the 100th anniversary of Japan annexing Dokdo a month earlier. (Daema-do is not a description of the island, as many disappointed English teachers were to realize after visiting Tsushima and not finding marijuana anywhere). Between these two stories of Jinju and Masan, one could perhaps quip that 'perhaps it's something in the water,' but that would be unfair to Masan, which was the location of protests in 1960 and 1979 which helped lead to the overthrow of two authoritarian presidents (one due to massive protests that spread to Seoul, another due to an argument over how to react to the uprising that led to his assassination).

But back to the story of netizens criticizing this celebration of Nongae. I certainly agree with the criticism that has come forth at the present time, but as Ben Wagner reminded me, in the past there were other netizens advocating the "Nongae experience" before Jinju's Nongae Festival drew attention: 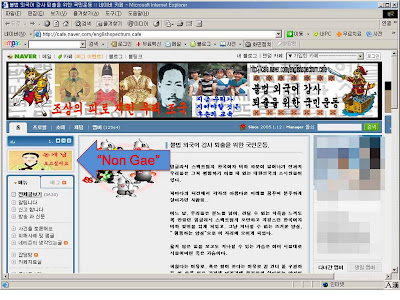 Anti English Spectrum's homepage in 2006 sported this picture and caption:

"Nongae, we miss you."
Beset by images of and, according to their own front page at the time, "humiliated" by the thought of no-good whores dancing and sleeping with foreign men, it's not hard to see how they would long for a women who not only refused to sleep with a foreign man, but also killed him. Perhaps somewhere there are photos of AES members partaking in "Nongae's sacrifice" during a visit to a previous year's festival...
Posted by matt at 9:14 PM

At least it wasn't a Realdoll.

It's interesting that even though she's the supposed herione, the Festival website still can't seem to help subtly putting her down:

"it is very commendable that a woman among kisaengs had that kind of integrity" and "It may be said that 'gwangis' are wanton prostitutes who can not have a strong sense of virtue or morality. But one of them was willing to kill herself to keep her chastity."

Wonder if any males take part in the festivities or if this is a strictly female experience.

Dokdo Times:
Nice find! I'm sure the 'gwangis' had standards of some sort - like, say, not sleeping with history festival organizers.

B_Wagner:
I updated with a few photos that have boys in them... though with their faces blurred, I suppose they could just be tomboys.