Glory be to thy hallowed DNA

[Update: The Joongang Ilbo has an English-language editorial titled "Football may be in our girls’ DNA too."] 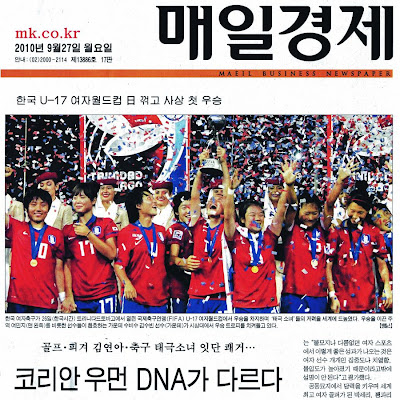 As we can see from yesterday's front page, the Maeil Gyeongje has let its readers in on why the South Korean team won the U-17 Women's World Cup:

Korean Women's DNA is Different
Out of only 345 women, 21 were picked, and in the end they did the job.
The splendid achievements in golf, figure skater Kim Yu-na, and the soccer Taegeuk Girls are connected.

Well now, I guess that may explain why Roboseyo "personally was told "foreign blood and Korean blood together has problems" [by] one of the nurses at a blood clinic[.]" It all makes sense now - Koreans' DNA is different. What a simple, obvious explanation.

Actually, while the article tells us that "Questions arise each time Korean female athletes accomplish great things on the world stage," it (sadly) does not follow up on the promise of the headline, instead dwelling on more mundane cultural and social influences. Mind you, the fact that "Korean women's DNA is different" was a headline on the front page of a newspaper should go to show that the idea of genes and bloodlines was dominating the writer (or editor)'s thinking, and that they figured others would agree.

Not that that should be all that surprising. It's interesting to note that as of a year ago, according to this, of the seven published sequences of individual human genomes in the world, two were from Korea, indicating a certain interest in the topic. As the introduction to this article in Nature by an SNU scientist states

If I had to make a guess, "understanding genetic ancestry" will be at the top of the list; more on the history of the focus in Korea on bloodlines and race can be found here. Of course, as far as understanding genetic ancestry goes, it seems some Korean groups are more certain than others of where they come from, as this pamphlet given by a proselytizer to Ian Baruma during the 1988 Seoul Olympics (and related in his article, "Playing for Keeps") reveals:

To All Mankind!—We proclaim that the Republic of Korea is the country where mankind was first created and civilization was cradled, and the parental country of all mankind. All mankind now participating in the '88 Olympic Games! We advise you to realize the fact that the Republic of Korea having about 5000 year [sic] long history, is your parental country."

Well, there you go.

It's interesting to note the different uses in the media for genetic references. This article examines how the U.S. media overlooked Norway winning 27% of the medals at the 2010 Winter Olympics, and compared this to the reaction to Kenyan men taking home 27% of the running medals from the 2008 Olympics:

[A] key difference is that when Kenyan athletes fare extremely well the tabloid press erupts with the news that Kenyans probably possess the right genes for performance, that they are genetically superior to runners from the rest of the world. [...]

The Norwegians, of course, are a different story altogether. When they out-compete big-brother Russia to the east, garnering 50-percent more medals than their Russian counterparts (despite Russia’s population of 142 million), the lofty Norwegian performances are simply the result of discipline, hard work, scientific training, culture, and the unique Norse environment. While Russian heads roll, not a whisper is heard about Norwegian DNA.

It's not for nothing that the Maeil Gyeongje article, with its headline about Korean women's 'different DNA', also noted that subtlety and perseverance are traits unique to Korean women, as this seems to be the point of this focus on genetics and bloodlines - to prove the uniqueness of the Korean race. This uniqueness has sometimes placed Koreans at great risk, such as when people (mistakenly) believed that Koreans were more susceptible to mad cow disease due to their genes (note the similarity to B.R. Myers' description of North Korean mythology wherein their virtue and purity makes them easy targets to a cruel outside world). Of course, it's often seen as a good thing, and this case this uniqueness has given Korean women the ability to excel in sports, even if the list of medals Korean women have racked up might seem scanty considering it stretches back to 1976, and oddly enough this "Korean Women's gene" did not allow their sisters to the north to do any better than fourth place in the U-17 World Cup. Odd how North Korea, with the same genetics, hasn't produced any star golfers or figure skaters.

Moving along from genetics, the Maeil Gyeongje article most importantly also informs us of the true value of these girls' achievement:

"Now 'Korean women' has become another unique brand which informs the whole world about South Korea."

That's nice to know, considering the number of people watching their opening games probably could have fit into a Nolbu Bossam restaurant. As Oranckay put it here, "[B]ringing glory to Korea is the ultimate standard for everything." He also quoted a worthwhile Hankyoreh article about "the sudden respect Korea's break dancers received after they starting winning competitions."

What has made B-boys so famous? Why is it that these low culture dancers are suddenly being praised by TV news anchors, introduced with no small amount of excitement by entertainment world gossip reporters, and are being embraced by the advertising industry? I myself think it's because Korean B-boys won the world championships. And I think it's because people were moved by the sight of white people waving Korean flags and cheering them on. Put differently, had these guys not won medals at an international event they'd have found it hard to shed the image that follows them around, one that sees them as hoodlums and losers.

It's hard to know if the pressure to succeed has gotten stronger or relaxed since the days of the 1988 Olympics. As Baruma relates,

The pressure on the Korean athletes was even worse. Not to win gold was regarded virtually as a national disgrace. Several Korean winners of silver and bronze medals actually apologized for their failures. [...]I thought of the images I had seen in the papers of Korean athletes being drilled in boot camp, wearing full military gear, and screaming "Fight, fight, fight!"

Of course, how victories are reported hasn't changed much, as a Korea Times columnist at the time wrote that, "We must say we are proud that the miracle-maker of the East, Korea, has done it again."

Thinking of such miracle-makers, or how subtlety and perseverance were said to be traits unique to Korean women, I was reminded of how the Korea Times reported Kim Yu-na's Olympic gold medal victory, referring to her as

“The Great Leader, the Sun of Korean people, Undefeatable Steel Commander, Legendary Hero Sun of the Nation, Father Marshal, Prominent leader of the International Communist movement, Genius for Theory and Practice of Management, Cresset of the Union, Successor of the Great Revolution Pursuit, The Greatest Hero of the Humanity.

Whoops. Sorry, that was from a blog entry about how North Koreans refer to Kim Il-sung. Here's what the KT had to say about Yu-na:

Kim Yu-na's Olympic triumph cements her status as the megastar of figure skating and the sport's most transcendent personality since Germany's Katarina Witt.

She became the first female figure skater to achieve the "grand slam," winning the World Grand Prix Final, Four Continents Championships, World Championships and the Winter Olympics. She is the first South Korean to win an Olympic medal in figure skating, and gold at that, while setting a new world record in the process.

And barring an injury or career-altering slump, Kim has to be considered a favorite to defend her Olympic title in Sochi, Russia, four years from now, which would allow her to join Witt as the only two-time Olympic figure skating champions.

[Not getting ahead of themselves at all, are they?]

Kim, who says she idolized Michelle Kwan growing up, now seems to be on course for a more productive career than the American figure skating great, while having a real shot at establishing herself as the best ever.

It remains to be seen whether anyone will emerge to challenge Kim ― her rivalry with Asada is now looking as lopsided as a Pyongyang election.

Of course, Asada is the only female skater in the world who consistently lands the triple axel, but Kim clearly does everything else much better, displaying a deft triple-triple (triple lutz-triple toe loop combination), poise and artistry.

It seems that the world has already seen the best of Miki Ando, another Japanese contender, and Canada's Joannie Rochette, who finished behind Kim and Asada for the bronze in Vancouver, has never managed to beat Kim in an international competition.[Emphases added]

And all a few days after Rochette's mother died - stay classy, KT. But then, it's understandable - nothing must stand in the way of showering praise (and the opportunity to shill for a soda or phone) upon those who bring brand recognition to Korea and glory to those with Korean DNA.

Christians aren't the only missionaries Korea exports, now are they?
Posted by matt at 8:52 AM