Above is a map of the immediate neighbourhood of Banghwa-dong where I lived (at top left). The yellow areas have been demolished and have mostly been built into new apartment blocks within the last four years. The red areas will be demolished in the near future. What's interesting is that in the photo below, taken in 1996 from Balsan Station (it's looking across the Magok-dong fields), the patch of low rise houses in the center of the photo have mostly been demolished in the last 13 years, or soon will be. The row houses in red at top right in the map above can be seen on the right below, in front of the apartments. In front of the row houses, next to the fields are greenhouses. 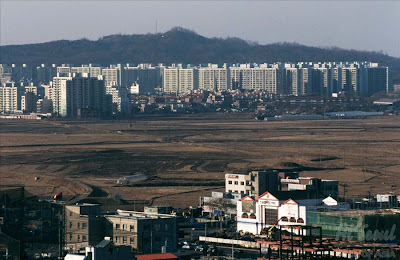 Behind the greenhouses (or to their left, below) is a neighbourhood I've ridden through before, but rarely went to because it's in the middle of nowhere, a small urban peninsula jutting out into the Magok-dong fields and hidden by the four-year-old apartment complex to its left. 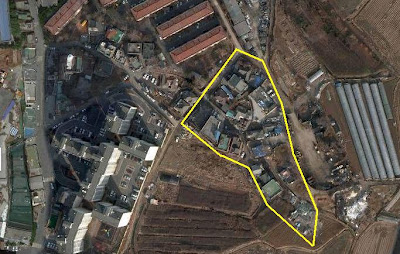 It was past this neighbourhood that I rode on my way home from exploring Magongnaru Station, and I returned there July 1. 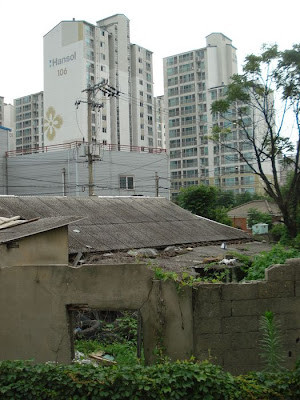 Some of the houses (but not many) were still inhabited.

I decided to take a closer look at the house on the right: 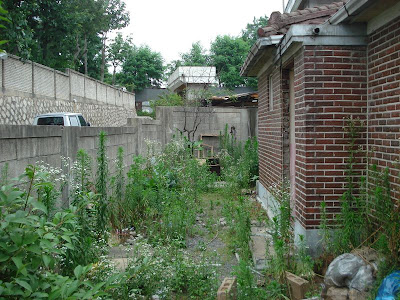 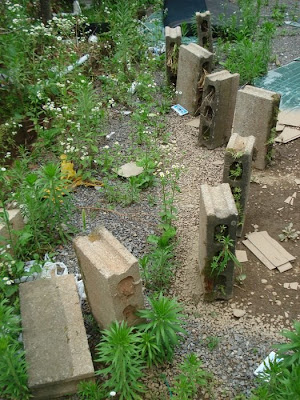 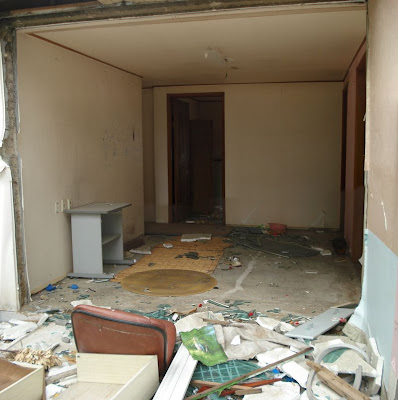 On the wall in the living room was some graffiti left by no fan of president Lee Myung-bak. 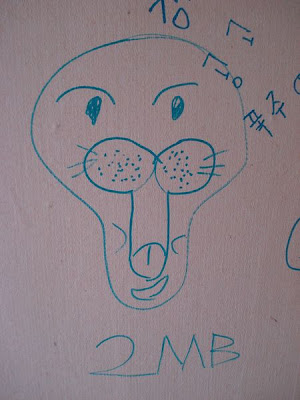 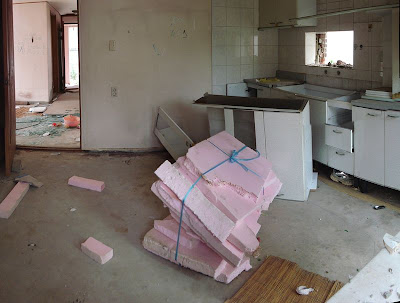 It seems the previous tenants moved out in May. 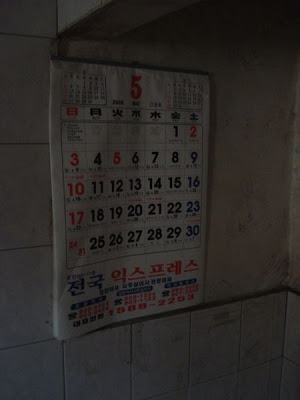 Continuing past this house, there were many other houses, some abandoned for a much longer time than others. 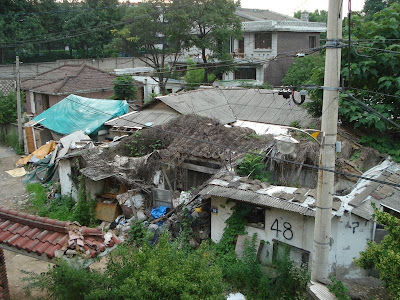 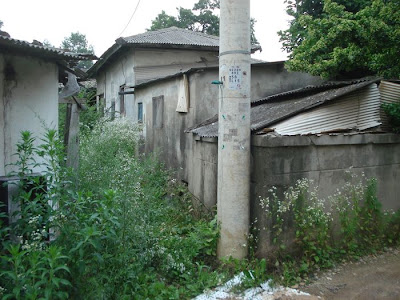 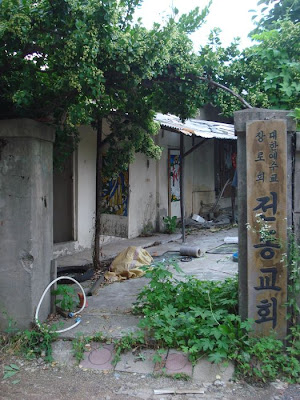 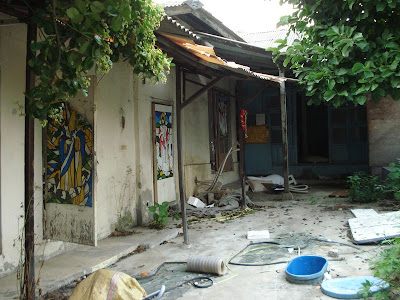 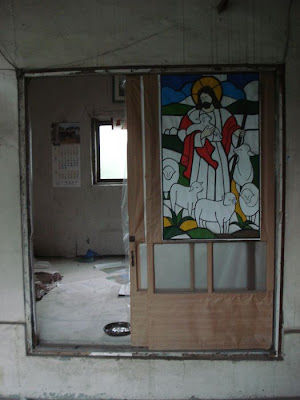 A pair of newer villas rise above the other houses. 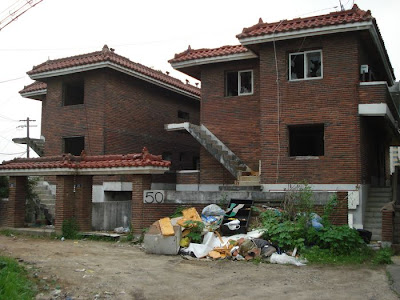 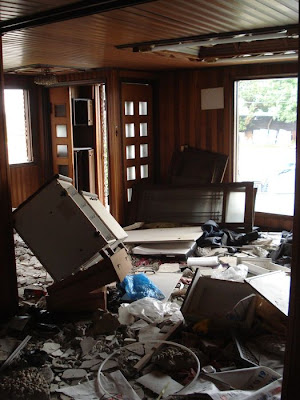 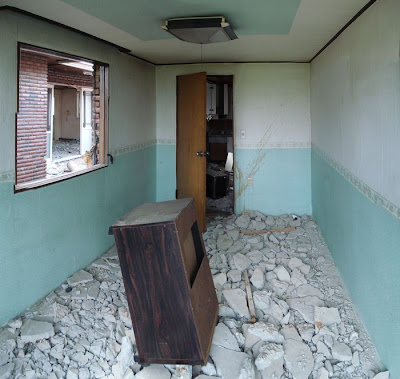 There was a nice view from the back window, and from the roof. Below are the fields that separate the neighbourhood from the rest of Banghwa-dong. 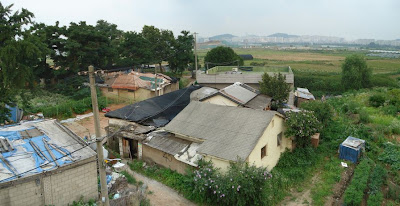 The apartments that replace this neighbourhood will likely have a nice view... at least until the fields are developed.
Posted by matt at 5:22 PM

I took some similar photos in my area down Yongin

I tried to document the destruction of the neighborhood near Gate 19 of Yongsan Garrison a few years back. A resident came out, thinking for some reason that I was from the BBC, and begged me to get out their story of how they were being forced out of their homes (very few people were left, though). It was quite sad.

Nice photos, Uncle Tomato. It's a pretty bizarre juxtaposition, the temple and the unfinished apartments. I like the house with the tiles and stone walls, and the green of that metal gate. The pieta in front of the church is based on a famous sculpture, but I can't remember which.

Kushibo, some of those stories are pretty sad. One old woman I talked to in Gindeung Maeul didn't want to leave and said, "I guess I'm just supposed to die, then." I'd be curious to see the photos of that neighbourhood.

Nice photos. It is easy to forget about these little spots around Seoul and how they are slowly vanishing as we speak.

Your response just triggered the memory of why I never posted them. I had been thinking I'd taken them with my first "serious" digital camera, a Canon S20 (circa 2001) that gave me constant problems with the battery, but your request caused me to visualize the photographs themselves instead of the actual neighborhood, and now I recall why the photos were bad.

Instead of the S20, I used a friend's regular camera, and it turned out that the pictures were discolored, looking pinkish, like you sometimes see colored snapshots from the 1970s (they reminded me of pics of me and my family when we were little). I originally had gotten the camera from my friend so I could take pictures of the cherry blossoms on Main Post, which are quite nice and usually uncrowded, so it might have been April that year, probably in 2005, though it could have been 2004 or 2003. I took someone with me the second time I went there, so I'll see if that person remembers.

Anyway, the pictures were not unlike yours, except that the backdrop was Namsan and the high-rises of Ichon-dong. One house in particular that stuck out had roses growing around it.

I was actually surprised to see anyone living there, but where could they go? In fact, there were protesters camped out in front of the construction site for a couple years at least after the houses were razed. I should check; they might still be there now. I think some of them got a raw deal — their land was valuable but their houses were not, and in some cases housing ownership might have been murky, I'm not sure. If memory serves, they told me that threatening thugs were sent in at night to scare them into leaving (I heard that somewhere when talking to people in this kind of situation, but I don't remember if it was there). These homes were where there are now four tall lookalike towers, a few hundred meters west of Gate 19 and Ichon Station.

Great photos looks like a real honest to goodness ghost town. so when is the rave party?

I've lived Kangseogu(the west of Han-river) for about 30years but you know well better than me I think.
Our house has been around since 1979 when I was 4years old.
Most of the houses in my area are reconstructed as four storied houses.
And there were some illegally built shacks near my place maybe from before I was born.
The ward office removed them last year and built a small park there.
It has become a better place to live.
Nobody know where the residents have gone.
But they recieved the compensation money for leaving from the government according to a rumor. They were lucky.

Let me know about the pieta. I should go back and see if anyone's actually using that church yet.

These photos reminded me of some shanty's that used to be located just outside of Chamwan Station.

When I lived in Chamwan-dong in the 90's I could never figure out why such valuable property remained as shanties. A couple years ago I checked in on Chamwon-dong; most of the area was now a public park, however a couple of the small buildings and one lean-to were still there. There existence in real estate crazy Seoul continues to puzzle.