The Chosun Ilbo has an article titled "Seoul's skyline about to be transformed:"

Seoul's skyline will undergo a major transformation, with five skyscrapers in the works that will be more than 100 stories tall, while a rash of building 60 stories or taller are being built. The 63 City building, once the tallest building in Korea, will soon be dwarfed by these new developments.

The 63 building hasn't been the tallest building for six years now, though I find many people don't know that. Surely it's not because the media often refers to the building this way? Anyways, I found this article funny because it looks much like a similar article from three years ago: 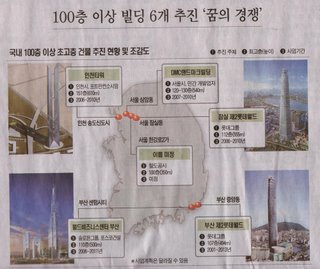 I've looked at some of the projects in the top photos, like numbers 2 and 3, here (ahem) as well as number 7 here.
Posted by matt at 7:30 AM

It amazes me that there are almost no "space for rent" signs in Korea. Buildings are always sitting empty where I lived in Canada. I wonder what they will put in all of the skyscrapers though?

You're right. As far as I know, the reason is that those already-planned skyscrapers are (somehow it turns out temporarily though) stopped because the military strongly objected the project. Especially the Air Force (you know the situation). But the MB government (claiming big-jaebeol-friendly) decided to allow all of them to move on, which I am very afraid of. It's not a skyscraper make a city look good and they don't look great to me, either.

Someone joked on the Marmot's Hole awhile back, when a new tower in Yongsan was announced, that the first 50 floors would consist of Budongsans (real estate offices) trying to rent out the top 50 floors.

I agree with Anonymous. I'd like to see Korea's metro areas and small towns renovate, rebuild, and revive their old structures before tossing up these glass-and-steel behemoths.

#8 is almost an exact replica of Shanghai's world financial centre (aka. the bottle opener). I assume that the plans for Seoul's version didn't have the 'rising sun' Japanese flag subliminally built into the apex (wikipedia.org/wiki/Shanghai_World_Financial_Center) .. not clear from the picture.
WFC is ugly - Jin Mao tower has far greater character and texture. Not to mention the foolishness of building the damn thing on reclaimed swampland right next to a river (global warming!?) - or maybe "Visit our venerable Venice of the East" is Shanghai's tourism slogan of 2035.

Architects (and graft-hungry politicos) involved: don't go the way of Pudong new area - build a city of character and class, and please don't buy into the pitiful phallicism that has possessed China's ruling class.

Seoul is the world design capital of 2010.. I hope Korea can show some sophisitication, restraint, and practicality - the hallmarks of good design.