One of those moments

Before I published this post, I removed the introduction and changed the title. After receiving some criticism for this post, I decided to reinstate them in the hope that I wouldn't sound quite as cynical as I did. When this was first published, it was titled "A great place to go for Valentine's day" (don't ask why, I'm not sure myself). Under the photo of the children was the caption "Don't cry, honey. Wait until you're in front of the cameras." Yeah, that was a bit much. I'd like to change more, but won't. The reinstated bit goes from here to the beginning of the Joongang Ilbo article.


Years ago, a few weeks after moving to , my supervisor pulled me aside and told me to keep an eye on one of the students. When I asked why, she told me that they boy's mother had had a bad dream about him the night before, and was worried something might happen to him.

It was one of those moments when I remembered that, despite the cellphones and traffic and supermarkets that seemed like home on speed, I was living in a very different culture.

I had another one of those moments when I read this Joongang Ilbo article: 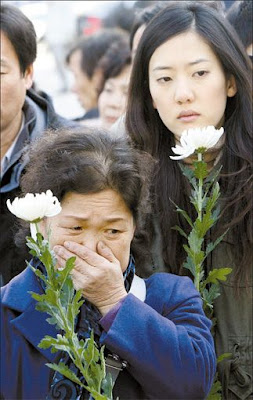 Shaking off the bitter cold, a stream of mourners continued to visit Namdaemun yesterday to see the rubble with their own eyes and pay their respects to the ancient structure. In the grass plaza behind the 610-year-old gate, a makeshift mourning altar was set up with apples, pears and soju on a picnic mat. A traditional funeral song blared from a speaker. 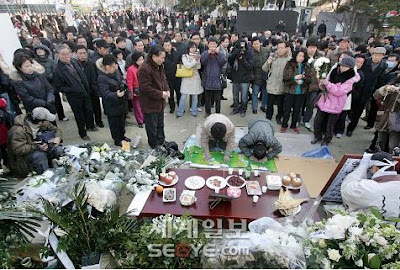 Visitors waited in line to offer a flower and bow twice, as is done at a traditional mourning altar for a dead person. 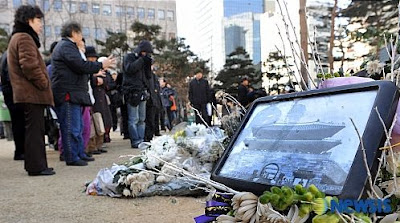 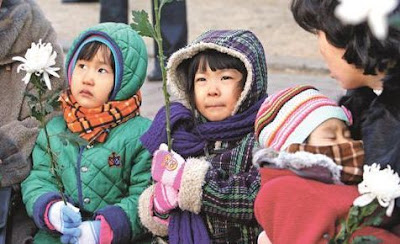 Children were among the mourners, as well. “I want to see your beautiful face again as soon as possible,” read a letter written by an 11-year-old elementary school student, placed in the midst of piles of flowers.

“The gate disappeared so unexpectedly, so Koreans are in shock. The gate was a representative symbol of our country and people think of it as a living creature,” said Yang Yoon, professor of psychology at Ewha Womans University. 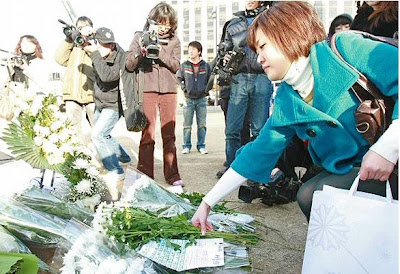 Ah, so that's why, then. I guess it has nothing to do with the presence of cameras, which mean that this is being shown on TV and in the newspapers and on the internet, and which means these people have a large audience in front of which they must act appropriately (by, say, shedding tears), which then draws more people to take part in something that makes them feel like they're part of a larger group. Right? I mean, we've never seen the presence of cameras cause people to suddenly break down crying before, have we?

I just wonder how people are going to act when the newly rebuilt Namdaemun (or Sungnyemun, as everyone has gotten into the habit of calling it since Sunday) is unveiled in a few years. I don't think there are many Confucian rituals for resurrection. Christians have a popular one, of course. If the media here follow the lead of the west, perhaps in a few years children here will love celebrating Sungnyemun's resurrection. I mean, who wouldn't love hunting for Sungnyemun- shaped chocolates that were hidden by a giant bunny?
Posted by matt at 4:44 AM

ok...cynicism is cool to a point, but to just hate on people for caring... because they don't care enough for your apparently more apropos cause? isn't that a bit much?

these people are revering the past, they are revering something that lasted the test of time, at least within their imaginations, and they are bowing down to that image. and what they are bowing down to isn't profit... it isn't superficial beauty.... it isn't faddish or cutesy or trite. it's truly something noble. something gorgeous. something that has been there "forever" and was supposed to be there till the end of time. they mourn its passing... and that's a bad thing? sorry, but your dissidence rings really fucking churlish right now, so piss off.

let them mourn in peace without your holier-than-thou "we need a good sense or proportion" thinking. it's their loss not yours, so butt the fuck out why don't cha?

and i only use swear words because you've been so godawful snarkish showing a damn far lack of compassion, if i dare say so. . . at peoples who are having a hard time dealing with loss.

they mourn something twice as old (if even in their imagination) as your own fucking country.... have a bit of feeling whydoncha?

Its a shame to see a treasure like this get destroyed, especially a historical monument like this, but let's see this mourning and crying for what it is.... a self absorbed way for people to get attention. I can guarantee that most of those people crying, walked or drove by the gates hundreds of times in their lives and never once looked up from their cell phone messaging to enjoy its beauty, and yes the gate is one of the most beautiful things I've ever seen living in Korea. What a shame that this happened, but nothing to cry over, especially when nobody died.

hey, your post was prickish, but to be fair you've consistently published such thoughtful and interesting posts on GofPF, so this critique from anonymous takes you a little too much to task, i think. actually the last line of your post is funny, but yeah, rude. whatever- it's winter. sometimes it's tuff to be nice.

your point about the citizens' reaction to media events is fair, but like with all cultural observations i think that we have to remember that the actions of X don't always indicate a national characteristic, especially because its always cloaked in the confucianistic korea-tude of it all. that's why i'm careful about judging much of the silly or terrible shit we see in this society. anyways, please don't begin censoring yourself too much, ok? you do good work.

hey,
i've enjoyed reading your blog over the past couple of months.

the typical care and detail of your posts suggest a curiosity that doesn't usually lend itself to the typical korea hating crap i read by many expats.

that said, your original post was strangely mean-spirited. perhaps your sleepy state let loose some frustration with korean people/culture that a well-rested you keeps under wraps, but show some compassion, buddy.

The modern media age - post Princess Di (?) - seems to have sent the intensity of such public outpourings into overdrive.

In my own country (Australia) we've just been just been subjected to a public grief-a-thon over the death of a middling young actor responsible for starring in one, possibly two, decent flicks - in the headline of one radio news bulletin Heath Ledger was compared in the same breath with Marlon Brando, I kid you, not!

And of course, not long before that, it was considered de rigueur to prostrate oneself at the alter of Steve Irwin’s knock-about Aussie ockerness.

It has reached the point where, late last year, a troupe of comedians known as ‘The Chaser’ got into hot water for none too subtly pointing out that many of the people deified by the media (particularly in death) aren’t nearly so nice in real life.

So, the moral of the story is, whatever you do, DON’T poke fun of people’s need to grieve over the death of celebrities, and the collapse of inanimate objects!!!

hahaha, man I understand where you are getting at. There are people like this all over the world, in countries where news prevails. But you have to also understand, there were some people who actually felt bad about the burning down of a national emblem. You should respect those people. It's nice being critical of people's behaviour. But, what could you do. There are liers and cheaters within a crowd of lovers. I really get what you're saying. People will only pay attention to it, if they want attention. They got what they wanted and they are gone. Just leave them lol.

Where is the crying for 22 Lunar New Year refugees (innocent men, women, and children) that were just killed at the hands of South Korea's brothers and sisters to the north? How can inanimate objects (as well as, birds, dogs, cats, toads--California, etc.) matter more than human life?

Some people's perspectives are totally out of whack!