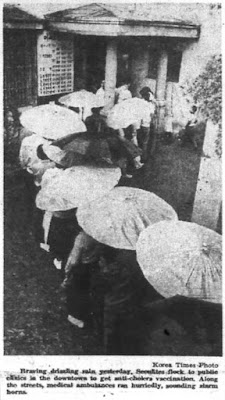 I was also surprised to learn of the 2001 outbreak; I don't remember it at all, despite being here at the time. I should note, however, that I referred to the above-linked article despite some concerns, namely the author's quotation of a citation-free newspaper article (which also contained statistics that contradicted the author's own). That article portrays the US Military Government's reaction to the 1946 cholera outbreak in a manner so appalling as to raise doubts about its veracity. If you're going to write that US "Soldiers annihilated an entire village because the villagers had hidden a person with cholera in a wardrobe," you should probably cite a reliable source.
Posted by matt at 9:27 PM