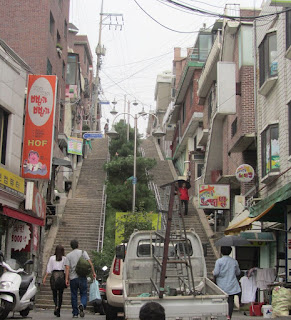 At any rate, it would be a shame to see those stairs disappear, which the article states is a possibility. Surely if some of the secondary stairways related to the main shrine on Namsan (now standing near memorials to independence fighters) can be allowed to remain, these can as well.
Posted by matt at 2:07 PM

That's what the article pushed. I'd have thought it closer to the Namsan Tunnel area, but while its's eastern, southern, and northern borders are clear enough, I'm not sure where it ends in the west, so I guess it could be considered 'on the edge.'

PS: I should have thanked you for the fascinating post. Thank you!