An article in today's Joongang Daily declares in its headline that "Textbooks do disservice to March 1 movement."


Rep. Han Sun-kyo, a lawmaker of the ruling Saenuri Party, told the JoongAng Ilbo on Thursday that he analyzed Korean and Japanese history textbooks he received from the Seoul-based think tank Northeast Asian History Foundation and Korea’s Ministry of Education and found the results troubling.

He said a “considerable number of Japanese history textbooks are distorting the facts or minimizing the significance of the March 1 Independence Movement.”

One Japanese middle school history textbook published by Jiyusa says the March 1 independence movement in Seoul “initially was planned as a non-violent rally but gradually became a large-scale movement,” and that “the army was mobilized and because of a clash on both sides, there were many casualties.” [...]

But Han added that Korean history textbooks also have inaccuracies, and there are many cases where they “describe the non-violent March 1 movement as violent” or do not mention key events or figures such as Yoo Gwan-soon’s martyrdom. [...]

According to Han’s study, half of the eight Korean high school history textbooks inaccurately described the independence movement as being “violent.” Three other textbooks failed to describe the movement adequately.

He found that only one publisher, Chunjae Education, explained the movement accurately and in detail. “As time passed, the protests grew more intense and military and police fired at people during the demonstrations, leading to deaths,” it said. The text emphasized, “The demonstrations were highly regarded internationally for holding to the principle of non-violence while trying to express resistance to Japanese imperialism.”

The problem is, the textbooks describing the independence movement as being "violent" are being accurate. While some of the Japanese dispatches during the Samil Uprising reported in the New York Times described violence on the part of demonstrators, I didn't realize just how violent the protests were until I read Frank Baldwin's "Participatory Anti-Imperalism:The 1919 Independence Movement" (Journal of Korean Studies, Volume 1, 1979, pp. 123-162). One assumes this contains some of the material in his dissertation, "The March First Movement: Korean Challenge, Japanese Response" (Columbia University, 1969). In his article, he notes that between March 1 and April 10, 1919, there were "approximately 667 peaceful demonstrations" as compared with "approximately 460 violent incidents." Here is his description of the nature of the protests:


Initially the demonstrations were nonviolent, partly to enhance the moral appeal of the protest and partly because of the vastly superior Japanese police and army forces. The usual pattern of demonstrations was that activists assembled a crowd and a local leader read the declaration of independence. The crowd roared its approval and then marched around the area shouting for Korean liberty.

As the independence movement spread and intensified, however, its character changed into often violent confrontation. This was a response to the severe, frequently brutal suppression of the protest by the Government General, which included firing on unarmed crowds and torture of prisoners. In many areas, a peaceful demonstration was suppressed by the authorities with force, and resulted in violent counterattacks on police and gendarmes. In other areas, frustrations, anger, and pent-up grievances turned peaceful demonstrations violent even without official provocation. In still other cases, tension from sustained demonstrations and confrontations, probably exacerbated by official violence, erupted into assaults on Government General personnel and facilities. In late March and early April, parts of Korea were in open, bloody rebellion. Governor General Hasegawa Yoshimichi requested troop reinforcements

During March and April the first stage of the 1919 movement occurred—the overt and violent period. Hundreds of thousands of Koreans engaged in open political actions ranging from lusty shouts for freedom to intrepid assaults on Government General outposts and vengeful mutilation of unlucky Kenpeitai, the Japanese gendarmerie. The second stage of the movement began in May and lasted until about April, 1920. During this stage, the independence activists changed their form of political activity from overt protest to covert planning and organizing, mostly in support of the Korean provisional government formed in Shanghai on April 10, 1919. The presence of additional troops from Japan, mass-arrest tactics, and stringent security measures made open protest activity unfeasible if not impossible.

Before those additional troops arrived, however, the Government General was hard pressed to maintain control and protect its staff, settlers, and infrastructure:


The Government General juggled the available troops, withdrawing some from North and South P'yöng'an and Hwanghae, now regarded as safe, and assigned them to southern Korea, where the violence was rapidly spreading. On March 25 eight infantry companies were spread thinly over five southern provinces—North and South Kyöngsang, North and South Cholla, and South Ch'ungch'öng. The assignment was made with the hope that they would only be needed until March 30. But the Koreans kept up their attacks. Crowds formed everywhere in Seoul, stoning police stations and trolley cars. In five villages near Seoul, myön chiefs were threatened and myön offices attacked. In many places Koreans armed themselves with clubs and stones and attacked the closest police station or my on office. March 27 and 28 were frantic, tragic days as Koreans attacked in many localities only to be beaten off by troops and suffer heavy casualties. Thirty nine Koreans were killed in a single incident in Kyönggi Province. The governor general authorized new troop assignments on the 28th but the attacks continued. On March 31 Koreans armed with clubs, sickles, and other improvised weapons stormed gendarmerie units and police stations at several places in Kyönggi Province. They attempted, sometimes successfully, to burn the local public buildings—myön offices, post offices, police stations—and cut telephone lines. In one place the crowd tried to burn the stores of Japanese merchants. Many Koreans were killed and wounded in the assaults. Despite heavy casualties and against seemingly hopeless Koreans continued the fight. [...] April 2 was perhaps the bloodiest single day of the independence movement as Koreans continued their attacks on gendarmerie units, police stations, myön offices and school buildings. Demonstration marches were a thing of the past: these crowds were prepared to fight.

Below is a list of casualties on the Japanese side: 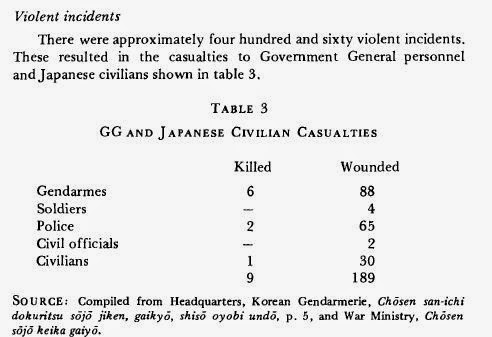 In a lengthy recounting of a violent protest in Sacheon, Pyeongannam-do on March 4, which Baldwin describes as a "typical demonstration that began peacefully and ended in violence," three Korean police officers are reported as being killed in addition to a Japanese police officer, which makes clear that the numbers above do not include Korean Government General employees, suggesting that more people died than are listed. Most ironic in the assertion that the Samil Protests were peaceful is this statement by Baldwin:


Because of continued Korean violence, the Government General requested troops from Japan, which served to further discredit Japanese rule in the colony and provided additional incentive for the Hara administration in Tokyo to make reforms. Violent forms of participation appear to have been most important in changing Japanese policy.

Additionally, the Jeam-ri massacre (looked at here) is better explained as the culmination of escalating violence on both sides rather than an out-of-the-blue mass killing by the (evil) Japanese.

The tale of "peaceful Samil demonstrations" serves the cause of depicting Koreans as a peaceful people beset upon by marauding outsiders; that is to say, victims with no responsibility for their actions. What better way to depict this fairy tale than a children's book about Yu Gwan-sun from the 한국 위인 전집 (Great people of Korea Collection) published by 노벨과 개미(looked at in more detail here): 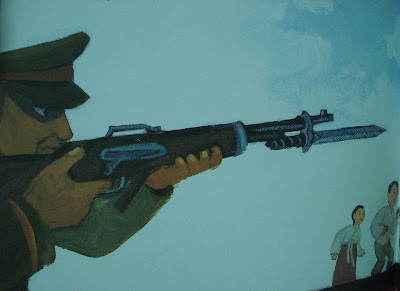 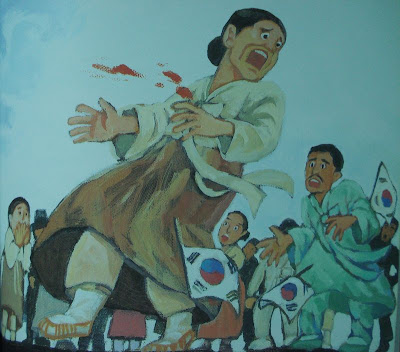 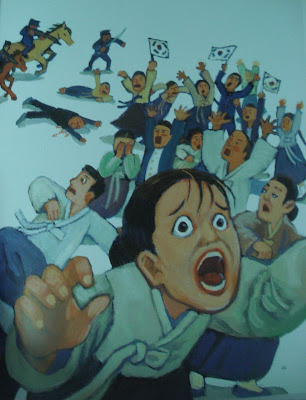 Returning to the Joongang Daily article:


Han also found that only one publisher, Jihak Publishing, described the patriot [Yoo Gwan-sun] in its text. In contrast, four out of seven Japanese contemporary history textbooks included Yoo.

The omission of Yu Gwan-sun from Korean textbooks is rather interesting. She's become an icon of the independence movement, much as Sin Mi-seon and Sim Hyo-sun became icons for those protesting the presence of USFK in Korea. Here is a poster which was once on the wall of the Yu Gwan-sun Underground Cell building at Seodaemun Prison: 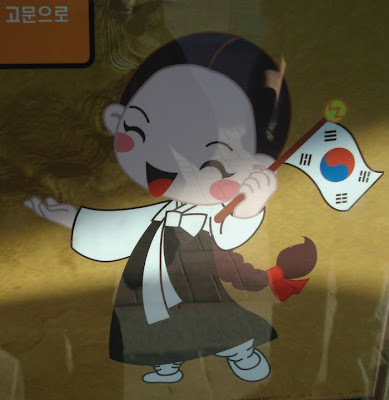 Can you imagine any of the male icons of the Korean independence movement being depicted in this way? Besides being the oddly cheerful face of the fight for independence, she's often depicted as the embodiment of victimization (and thus embodies Korea throughout its entire history, according to some nationalist takes on Korean history). Here she is in the 'Great people of Korea Collection' book about her: 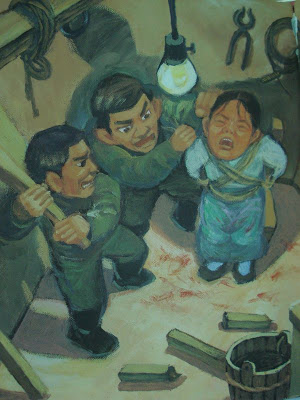 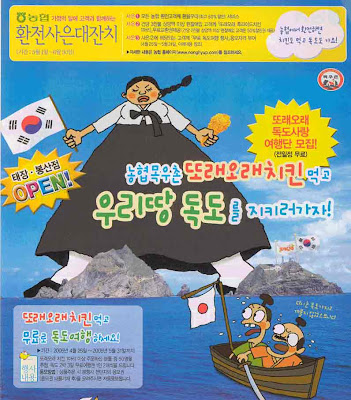 The final paragraph of the Joongang Daily article offers this short biography of Yu:


Yoo (1902-1920) was a prominent independence movement activist who was one of the organizers of the March 1 movement. She eventually faced torture at the hands of Japanese officers and died in prison in September 1920. When her family asked for her body to be returned to them, Yoo’s body was returned cut into pieces.

In truth, most of the "organizers" of the movement offered themselves up for arrest after reading the declaration on March 1, essentially robbing the movement of its most respected leaders at its very inception. Yoo certainly organized protests in Cheonan after leaving the Ehwa school girl for girls, but is more likely remembered because she was a student at a prominent missionary school, and because she is the perfect symbol of innocence brutally snuffed out by the brutal Japanese. The main problem I have with the paragraph above, however, is that she was certainly not "cut into pieces." As is described by Jeannette Walter, an English teacher at Ehwa, in Donald Clark's "Living Dangerously in Korea (The Western Experience 1900-1950),"


Yu Kwansoon, a little sixteen-year-old girl, died in prison. We had her body brought back to the school, and the girls prepared cotton garments for her burial. [...] However, when I was in Korea in 1959, I was interviewed by a group from Kwansoon's school, and I assured them on tape that her body was not mutilated. I had dressed her for burial.

One wonders if it is Rep. Han Sun-kyo or the Joongang Daily that is responsible for that canard once again being trotted out. A disservice may be have been done to the memory of the Samil Movement, but I'm not convinced its the textbook makers who are responsible.
Posted by matt at 8:38 PM

So it essence, it was no different than Gwangju 1980 massacre when the protestors took up arms and barricaded the city. In that regard, the March 1, 1919 independence protest was just an armed riot by bunch of marauding Koreans rebelling against the rightful government.

Much like the American Revolution, or Hungary in 1956.[Sarcasm off.]

It's not the first time Korea made up "peaceful victimized Koreans" story. There's a endless list of various fabrications of history Korea has ever made. For example, she claims that, during Kanto Great Earthquake Sep.1.1923, Japanese spread 'false' rumors that Koreans committed atrocities such as raping, setting fire, bombing etc, and 'innocent' Koreans were massacred by them. However, the fact is it was not a false rumor. Koreans actually committed atrocities during the disaster. Various newspapers reported many of them. Koreans are still concealing this fact and claiming everything was made up by Japanese.
http://cooljapan1.blogspot.jp/2013/10/koreans-concoct-japanese-outrageous.html
We're really out of patience with Koreans. They don't hesitate to lie and always put the blame on Japan for what they in fact have done themselves. I also don't believe the exhibitions in the Independence Hall of Korea at all, that are made of wax dolls recreating the scenes Japanese torturing Koreans.