Go check out Roboseyo's post on the 1972 Shin Joong-hyun song 아름다운강산 (Beautiful Rivers and Mountains). Beyond discussing Shin and the song (and linking to the various versions of it, including the psychedelic wonder of the 1972 original and Kim Jung-mi's version from a year later) he also let me know that the writer of 나의조국 ('My Country') was Park Chung-hee. I actually have an LP of that same name by the 'National Chorus Choir' which was released in March 1977, and the songs on it are all godawful (as I figured it would be - but seeing the song titles like 'Song of the Minjok' and 'Saemaeul Song,' along with lyrics and a picturesque enough cover, made me want to buy it). 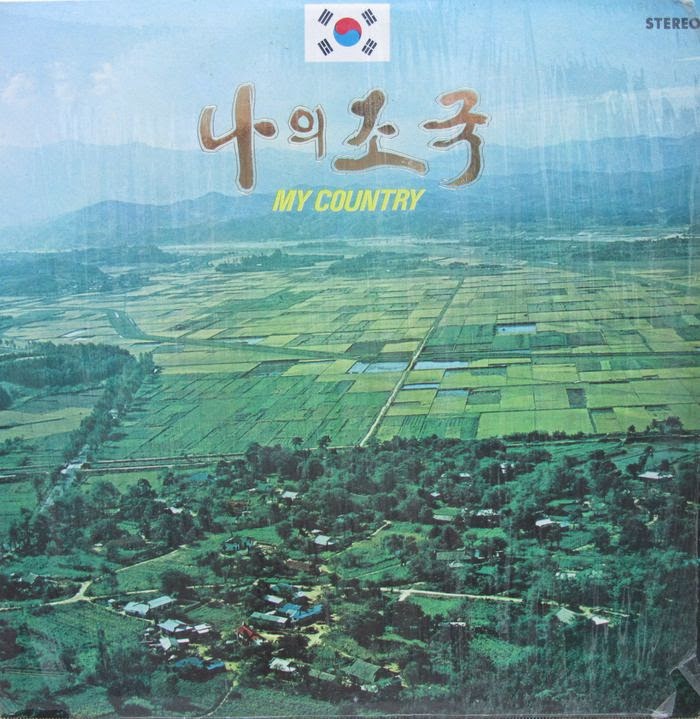 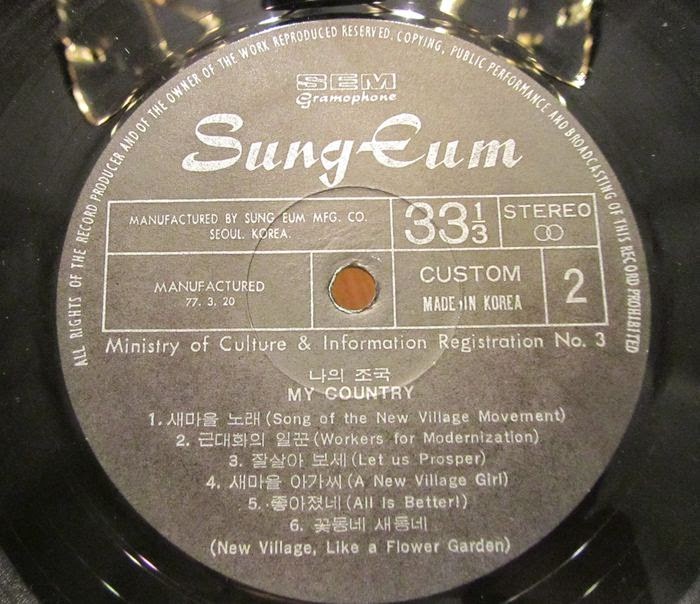 (Interesting that there are song titles in English.)

Here's what 'My Country' sounds like - just to give you an idea of what Park Chung-hee wanted people to listen to:


President Park songwriter of 'My Country'

It has been revealed that the lyricist and composer of the song 'My Country,' which has been played widely on radio and TV, is President Park Chung-hee.

This was revealed on December 10 by an official who knew this fact while returning in a car to Seoul after attending a Saemaeul leader convention in Daejeon.

As it turns out, releasing the song and officially claiming credit for it later was how Park did things. As this June 30, 1972 Kyunghyang Sinmun article, titled "President Park songwriter of 'Saemaeul Song,'" reveals, the Saemaeul Song was written in early May 1972 (two years after the start of the Saemaeul Movement) by the president, and the original recording featured piano played by a high school student. Park, however, had not wanted it known upon its release that he had written it, so "the writer of the song that people across the country loved to sing was hidden, but the fact was spread from mouth to mouth" until it was officially announced by the Blue House on June 30 that he had indeed written it.

This very lengthy report gives a ton of information about the Saemaeul Movement, as well as a translation of the lyrics. Here's the song itself:

1. Dawn bell rings, new dawn breaks
Let me get you up, for building Saemaul

Refrain:
My village a good place for living
Let us build with our hands

3. By helping each other, by working with sweat
Endeavoring for income boost, let us create a rich village
(Refrain)

4. We all strongly, working while fighting
Fighting while working, let us build a new father land
(Refrain)

The funny thing is, while 'let me get you up' isn't how I'd translate it, it's more true to how things turned out, at least according to what a former Peace Corps Volunteer told me. Apparently the Saemaeul Song was played at dawn every morning through an outdoor speaker near his house, so the song did actually 'get you up,' or wake you up, at least. To paraphrase him, 'I don't know how many times I thought about going out and cutting that damned speaker wire.'

The style of the music, the fact that it was played every morning for citizens to wake up to, and the lyrics should give some idea of the culture clash at work between the youth culture of the day and the culture the authoritarian government wished to cram down its citizens' throats (or in their ears), a clash that ended in 1976 with the arrests of dozens of musicians, artists, and film directors. 'My Country' is essentially a victory cheer by President Park, and a reiteration of his vision for a counterculture-free society. But I can't help but notice how similar it is to North Korean music I've heard.

I'd thought of doing a long post about music from the 60s and 70s, but Rob gave me the (great) idea of doing a series of smaller posts. So up next will be a look at Shin Jung-hyun's first album from the late 1950s.
Posted by matt at 3:42 PM

Thanks for this post!
I'll look forward to the series on Korean rock from the 60s and 70s.

Interestingly, when I mentioned to my wife and mom-in-law that Pres. Park Chung-hee had written a "wholesome song" they both started singing 새마을 노래, but they didn't know that he also wrote "My Country" -- my wife said she'd never heard it before. I'm quite sure I've heard it (or its spiritual twin) for the morning calisthenics of middle schools I've lived ner.

If I'd just heard heard it without seeing the footage, I would have assumed it was NK. Even 75% of the footage might be NK.