Can't the big-nosers leave Korea alone for even a moment?

In 1884, as George Foulk, an American naval attache and one of the first westerners to learn Korean, traveled around Korea, he chatted with a Korean man who considered him and all foreigners "half-barbarians who only thought of doing harm to his country."

One hundred years did little to change this attitude. In 1990 (as was noted by seouldout), Nonghyup distributed a comic to elementary school students explaining to children why opening the Korean market to imported agricultural goods wasn't such a good idea. As part of a multifaceted attack on imported goods, it was explained that they weren't as healthy as good Korean foodstuffs, that eating them was un-Korean, and that the imported goods sent to Korea would be rotten by the time they arrived. This page and a half explain further the great threat posted by these goods: 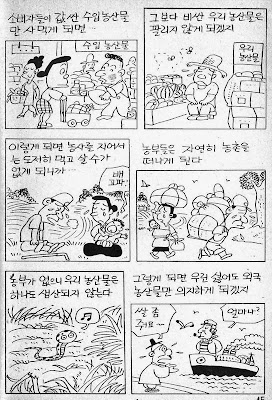 "If consumers only buy imported farm goods... Our more expensive agricultural goods won't be sold.
If this happens it will be impossible for farmers to eat and live (the baby cries, 'I'm hungry!'). Farmers will of course have to leave the farming villages.
And without the farmers, our agricultural goods won't be produced at all. If that happens, we'll have to depend on foreign agricultural products even if we don't want to: "Please give us rice."  "How much?"

Then they will turn this against us...  "Let's make it expensive."
Since they can raise the prices as high as they like, we will have to choke back our tears [and buy it anyway]. "If you charge that much, how can we live?" "If it's expensive, don't buy it!"
---
And once again students learned the valuable lesson that if Korea was to open its borders even a little, rapacious foreigners would take advantage of Korea!

The solution was to monitor one's parents when they went to the market to stop them from buying foreign goods and bringing about the destruction of Korea's agriculture and way of life. 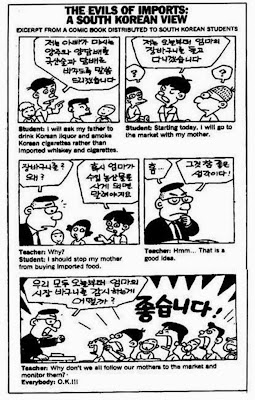 Of course, when the Washington Post decided to translate this scene, the Kyunghyang Sinmun, referring to 'Nonghyup's PR', headlined their article 'American media also joins in on trade pressure.'

So, in the 23 years of globalization since, has this view of the rapacious foreigners out to harm Korea changed?

Perhaps not. James Turnbull sent me this poster awhile ago, and it's barrels of fun: 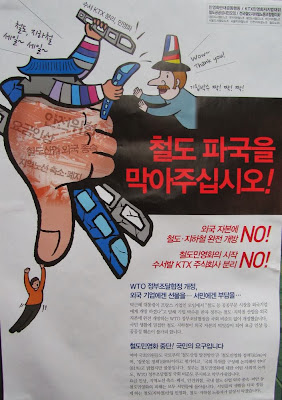 For a close up: 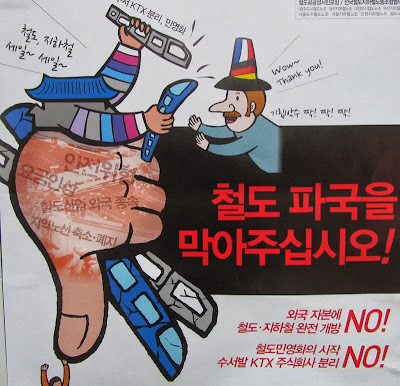 "The complete opening of railways and subways to foreign capital - NO!"
"Starting the privatization of the railroads by separating the Suseo KTX corporation - NO!"

Most fun is the image below, showing the turning over of Korean trains by the traditional-roof-and-hanbok-clad 'Korean government' to a big nosed French or German compete with 19th century top hat, sideburns and moustache. 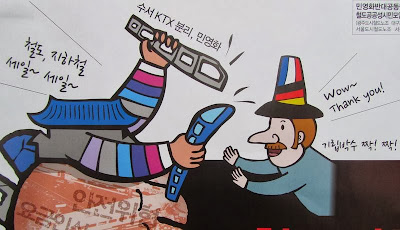 
Can we expect more projections of dastardly deeds by big-nosed foreigners in 2014? Only time will tell!
Posted by matt at 5:55 PM

Is it me or do some of the characters in the cartoon the WaPo translated look really Simpsonesqe?

"Can't the big-nosers leave Korea alone for even a moment?"

It would be more accurate to say that Koreans, in particular the Korean media, can't leave the big-nosers alone for even a second, since Korean identity only finds its distinctness and uniqueness in contrast to non-Koreans; Korean identity, in other words, is a function of relational difference, sort of how the term "uri" or "us" -- and it's no accident that one hears it constantly here -- makes no sense without the corresponding term "them." Moreover, the fact that Korean nationalism was historically constructed as an ethnic "essence" means that Korean nationalism cannot help but view non-Koreans in ethnic or racialized terms as well.

Given this dynamic, who can blame companies and other interested parties here from attempting to monetize or exploit it? They would be fools not to, of course.

It's just such a sad state of affairs that there is no real education going on in this country. . .but then, who are the majority of teachers they meet? Even most of the waegs I know want the soft job so it gives them plenty of time to write comments on websites instead of stepping up and doing the hard work.