Last week a ramp under construction which is meant to eventually connect to the Banghwa Bridge collapsed, killing two workers. As the Joongang Daily reported,


At around 1:04 p.m., a 47-meter (51.4-yard), 320-ton steel ramp connecting the bridge and Banghwa-dong, western Seoul, fell from a 10-meter supporting pillar. It fell onto the construction site beside the bridge.

There were four workers at the site. Three of them were building a wall of the ramp, according to the Seoul city government.

All three workers fell when the ramp collapsed. The fourth worker was unscathed for reasons not immediately known.

“We assume the whole structure tilted on its side and fell,” O Nam-jik, a city government official said at a briefing yesterday. “The exact cause of the accident is under investigation.”

O said the city government had no clue why the ramp fell off its pillar.

One of the two fatalities was working in a kind of forklift while the other fatality and the injured worker were spreading asphalt, according to the city government. The construction managers were having lunch away from the construction site at the time.

All four workers on the site were Chinese nationals. The two fatalities were Choe Chang-hui, the 52-year-old driver of the forklift, and Heo Dong-gil, assumed to be in his 50s. The injured worker was Kim Gyeong-tae, 60.

Rescuers struggled to recover the bodies of the two dead men, which were under the ramp.

“I was sitting on the backseat of the forklift and everything collapsed,” Kim Gyeong-tae told the JoongAng Ilbo. “My two coworkers died immediately and I survived.”[...]

About 83 percent of the construction was completed, according to Seoul city government. [...]

Here's the photo which accompanies the article: 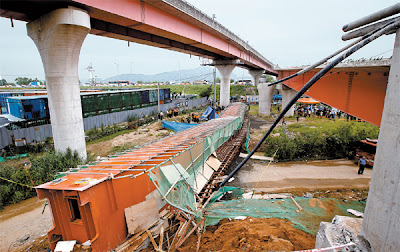 The Joongang Daily followed up with an article titled "Safety not a priority on city’s construction sites," as well as an editorial blaming (shockingly!) progessive mayor Park Won-soon for the accident, which has come just weeks after workers drowned in a tunnels under the flooding Han River.

The Korea Times mentions that


The municipal government began construction on the entrance ramp in 2005 at a cost of 109 billion won (US$98.6 million) for completion in June next year.

Actually, it was in the fall of 2006 that the hoardings went up. What they don't mention is that the project is - in its current phase - actually to connect Banghwa-dong to the Olympic Expressway via a tunnel through Chihyeonsan. This aerial view shows the Banghwa Bridge at top right curving as the Incheon Airport Expressway begins, as well as the Olmypic Expressway (running from top left to bottom right (or vice versa)) and its entry/exit ramps onto the Airport Expressway. At bottom you can see a new, white ramp heading from one of the two tunnels at bottom which punch through Chihyeonsan. Less obvious is the exit ramp from the Olympic expressway which curves towards the tunnel on the left. It's next to this ramp that the accident took place last Tuesday. 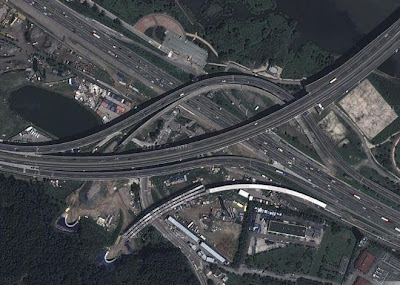 The long term plan is to connect the tunnels to the Banghwa Bridge as well, and you can see (above) that the bridge has lanes which end abruptly. You can also see that the white ramp curving into the tunnel meets a fanned out structure too large for it. Here's a photo I took last Thursday which makes clear the two unconnected ramps (at right): 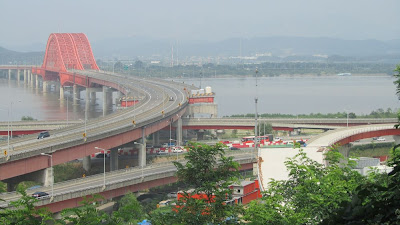 I also tried to get a shot of the accident site, but it's just out of sight. I'm not even sure if, two days later, the fallen ramp was still there or not. 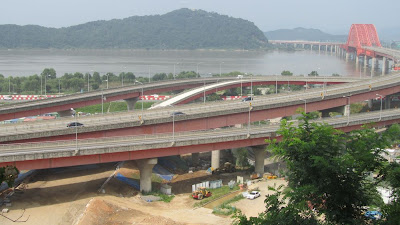 At any rate, below I've mapped out where these should eventually connect the bridge to the tunnels (after several more years of work): 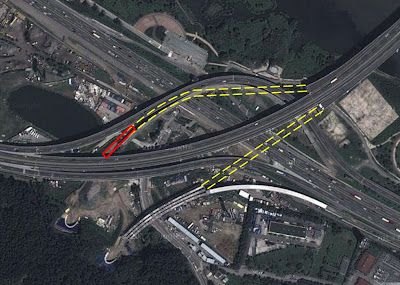 They hadn't built the 'fanned out' part for the left-hand tunnel yet, and it was that part - the red part above, which fell off its support and flipped over. One thing I don't understand is why that section comes in on the outside of the existing ramp (as the right hand ramp makes clear, it would make more sense to have it come in on the inside... it honestly makes no sense to me).

Here's the original plan from a 2003 map; somewhere along the line someone decided to connect the tunnels to the Olympic Expressway as a first (easier) phase, and add ramps to the Banghwa Bridge later. 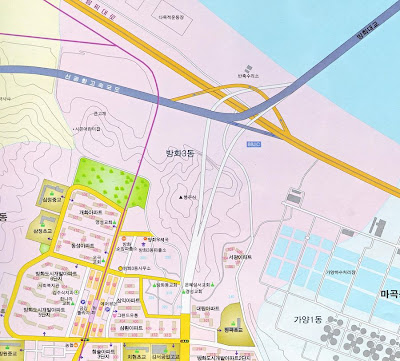 Here's a view of the Banghwa Bridge from before construction on the ramps began: 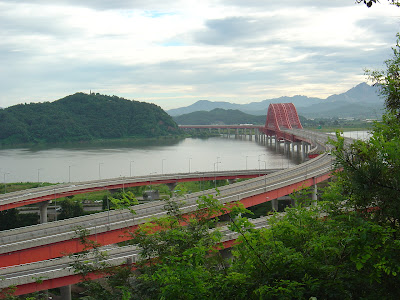 Here's a view much later (first posted here). Note the piers with the wide supports for the two ramps will meet at bottom right. 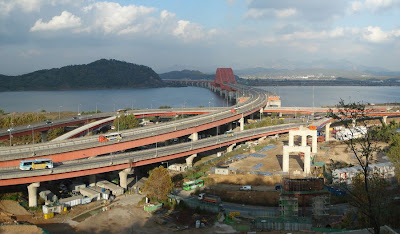 Compare this to the two separate supports seen below (the rest of the photos are screenshots from this KBS news report). 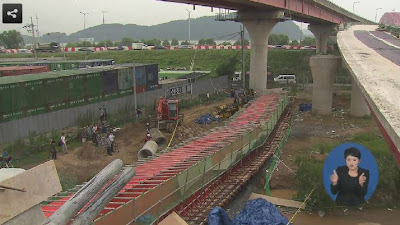 Another news report makes clear that the pier next to the overturned ramp has damage on its left side - but whether that was a result of it falling off or the cause of it is unknown. Below we can see where the two ramps came together in front of the tunnel. 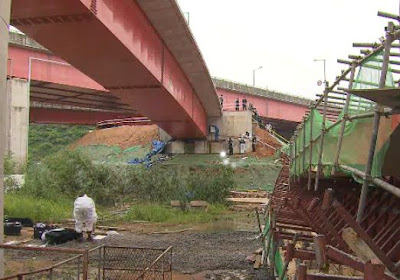 This joining section can be seen below as well. 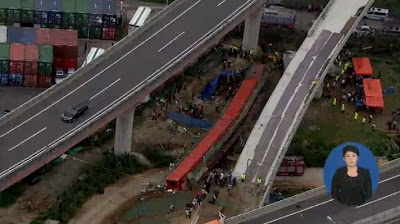 Below you can see that it had apparently been laying on the lip (where the man is standing at center, and which other shots makes clear is only a meter and a half wide). 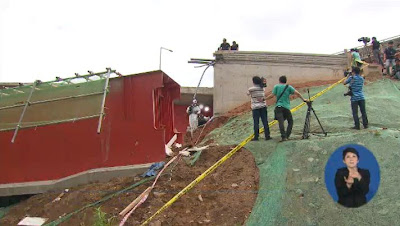 The lip can also be seen here:

It can be seen here at bottom left, and there is apparent damage.

The photo in this article shows both the lip and the pier as well. Needless to say, at the moment it isn't clear what happened. Something clearly went wrong, and it's tragic two people died because of it.

Not shown in any of the above photos are the tunnels through the mountain, which have actually been finished for a long time - it's the ramps that have taken so long. I'll post about the tunnels next.
Posted by matt at 10:52 AM