KBS: 'I can also suffer from the two faces of the internet'


Part 19: KBS Morning Newstime: 'I can also suffer from the two faces of the internet'

On Monday January 17, 2005, KBS Morning Newstime (at 8am) broadcast a four minute report on the English Spectrum incident - the first time it was mentioned on television. It can be watched without having to log in to KBS's site here. Find the date below the viewer and change it to January 17, 2005, and then scroll down to the report marked below: 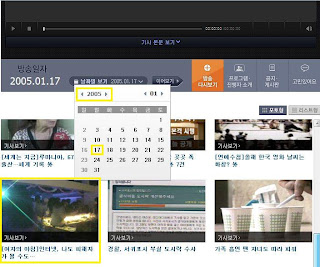 The segment (which falls online under the heading 'Women's morning') is initially headlined "On the internet, I can also be a victim." 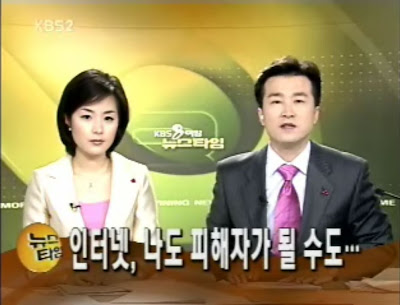 The anchors state that there is furor over photos and writing posted at a foreign teacher site because its so decadent and sensational. It mentions that the posts sexually denigrated Korean women, that the controversy over it continues to spread, and that the report will look into the truth of it.

We're then told that a foreign English instructor site recently posted photos of Korean women at a lewd party thrown at a club in Hongdae last November, and that because of the photos both the foreign instructors and women have been criticized. The photos begin with a zoom in on the bare skin in this photo, but most of the others are blurred and appear so fast it's difficult to know what's going on in them. 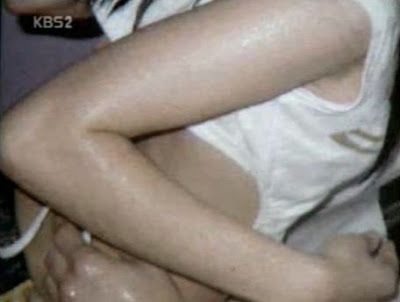 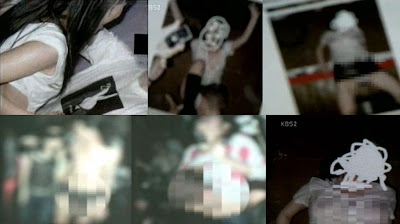 We're then given the full title of the segment: "Two faces of the internet, I can also suffer." 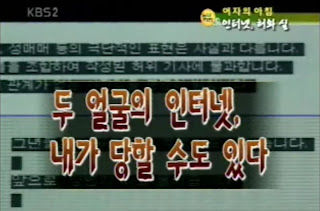 To make clear the abuse the Korean women are suffering, the Korean sentences which the title appears over read: "Those bitches don't like to be called 'yanggongju.' From now on, let's call them 'yangbyeongi' ['westerners' toilets'].

We're then shown examples of writing sexually denigrating Korean women at the 'problem site,' such as "Korean women who enjoy free sex* treat you like a king," and "In Korea, women are easy to sleep with." 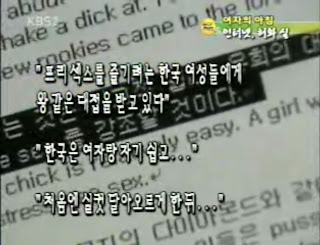 At another site a foreign teacher described how to molest child students: 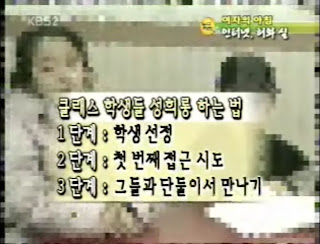 Step 1: Choosing the student.
Step 2: How to approach them.
Step 3: Meeting them in private.

It then notes that an anti site centered on some netizens had started a signature campaign to kick out low quality foreign instructors and that a post calling on netizens to take part in a strike force had appeared. A snippet of online text also appears onscreen which reads "[we] should kill," but you can't see who." It also says that the netizens have indiscriminately criticized foreign instructors and the Korean women in the photos.

Two women on the street then offer their thoughts on the photos spread on the internet and sympathize with the women.

On the night of January 14, reporters then went into Mary Jane club, where the 'lewd party' was held.  We're shown a shot of the exterior and scenes of dancing and drinking inside. 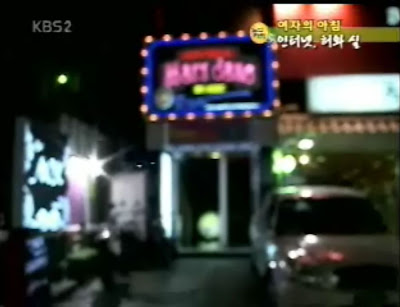 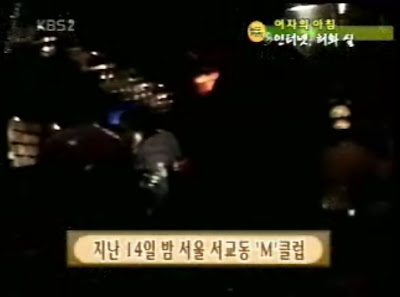 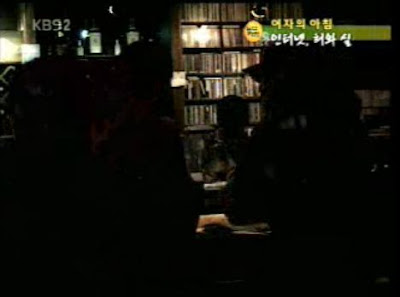 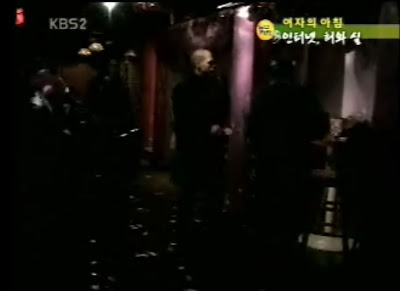 There they interview the owner and a member of the staff who appeared in the photos, who can be seen (blurred) wiping away tears below: 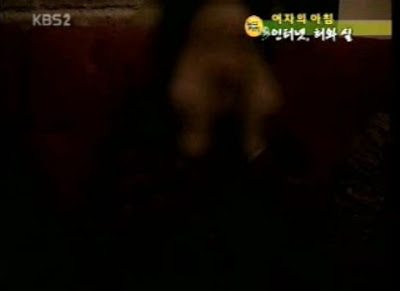 Much of what they say is similar to an interview they gave to the Segye Ilbo a day later. The owner describes how the people at the party thought that it wasn't fun despite the 'sexy costume' concept, so one of his employees 'directed' the action. That employee (also one of the woman who appeared in the photos) is interviewed and describes how the photos were only taken during a 1 or 2 minute 'happening' when people posed for the cameras, after which clothes went back on and things returned to normal. The owner then explains that it was mostly Koreans, including Korean men, at the party, and that among foreigners there were just as many women as men.


It's also noted that some of the photos distributed on the internet weren’t taken at the party, namely the one below. 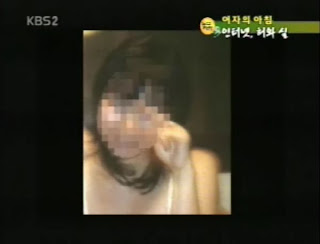 The woman in the photo is interviewed by phone and says it was taken when she was dating a foreign friend, at his house, a year or so before, and had nothing to do with the party, which she knew nothing about.

It then mentions the problems with such distortions by the teachers who posted such photos, and notes that both the women in the photos and the anti site are both going to the police to take legal action, and that the truth of the photos has not been confirmed. While this is being said, these photos appear: 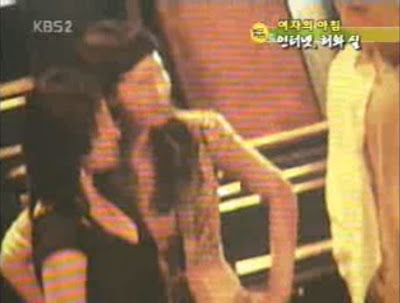 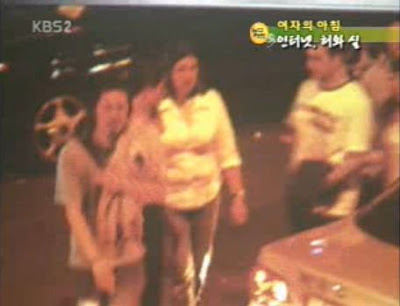 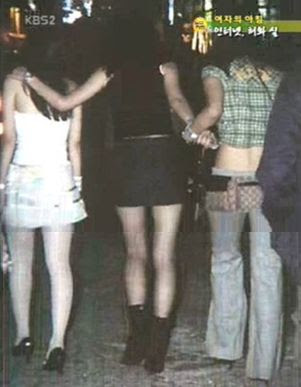 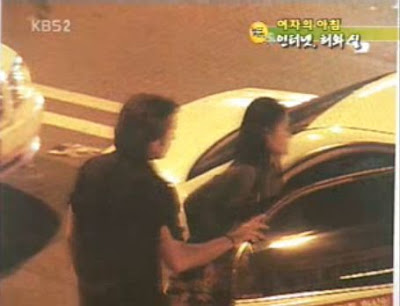 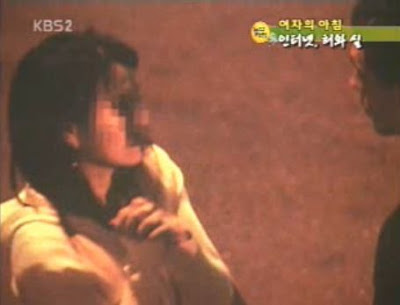 The show doesn't make clear the source of these photos, but they haven't appeared elsewhere, and unlike the party photos at English Spectrum, none of the people in these photos appear to be aware that they're being photographed, and they're all taken either from above or behind, and all seemingly on the street. I find it hard not to think that these were taken by members of Anti English Spectrum. Perhaps they got an early start at stalking foreign men and the women they date.

The segment then ends with a lawyer discussing the right to your own image and the legal ramifications of posting photos online without someone's permission, and essentially warns netizens about this.

As you might be able to tell, while mention was certainly made of the 'lewd' party and the postings of bad foreign teachers, the subjects of the story were in fact the women who were victimized by the internet. It's generally a reasonably balanced look at what was happening, and the netizens come off not looking good at all. Needless to say, any news broadcast which made the members of Anti English Spectrum look bad and women who they considered to be traitorous whores look like innocent victims was something that they could only regard with outrage. A lot of outrage. Luckily, some of what they wrote was rather revealing, as we'll see in the next post.

On the bright side, at least from Anti English Spectrum's point of view, in the future they would have many, many chances to collaborate on news stories which painted foreign teachers in the worst ways possible.


[*The original English sentence refers to Korean women enjoying 'stress-free sex' with foreign men, but that was left out of the initial translations in the media. Perhaps the idea of free sex was disturbing because it suggested they weren't just having sex with prostitutes, but 'good' girls. As this Kyunghyang Sinmun article about Itaewon put it in 1984,


"It's not just foreigners' prostitutes, now it's female university students or teenagers from good families who chase after foreigners and spend money on them, and when I see it I think it's pathetic," said Hong Gwan-pyo, who has sold souvenirs in the area for 8 years, with a sour look on his face.

And the Le Monde article a month later which set off the French Teacher Scandal of 1984 stated that "Pierre has married a woman from a very good Korean family he encountered in a chic club in the city," something which seemed to raise the ire of commentators.]
Posted by matt at 11:21 PM