As noted at the Marmot's Hole Monday, another Korean American wanted for (attempted) murder has been found to have worked as an English teacher in Korea, and in this case even ran an SAT hagwon. Here's what the Joongang Daily had to say about it:

The Seoul Metropolitan Police Agency said yesterday that the man, surnamed Kim, was charged by Los Angeles police for shooting at two Mexican gang members in May 1997 with two others when Kim was 17. Kim and his accomplices belonged to Fliptown Mob (FTM), a major Korean-American gang in Los Angeles.

Kim fled to Korea that July and began living under someone else’s name starting in 1998. With the help of a relative in Korea, Kim was able to forge a passport and a driver’s license using a resident registration number belonging to an acquaintance, surnamed Lee, who had moved to the United States when he was young and no longer needed the number. Using his new identity, Kim traveled abroad 34 times until his arrest, police said.

In 2002, Kim began working as an English teacher in the Gangnam area until he set up his own hagwon in 2008 in ritzy Apgujeong with a partner, identified as Kang, 36. Kang and Kim had grown close from working as English teachers together in other institutions. [...]

Kim was found to have only a high school degree, police said, and forged his academic record to say that he had graduated from the University of California, Los Angeles, or UCLA.[...]

The two also face charges for illegally hiring unregistered teachers who do not have proper certification. Police said Kim may be extradited to the United States.

As noted in this article, Kim used the resident number to get a resident card, then a driver's license, a passport, health insurance, and registration as a hagwon owner. Also, it's stated elsewhere that he went on 17 overseas trips (which would have involved 34 different flights), not 34 different trips.

This is now the fourth Korean American gangster wanted for murder or attempted murder who hid in Korea for years working as an English teacher. The most recent was a Korean Canadian wanted for a 2007 murder in Toronto who taught in Korea for years, who was arrested last October.

Before that, in March 2010, a Korean American wanted for murder in Los Angeles was found to have worked as an English teacher in Korea for years. This led to a number of articles and editorials critical of 'native speaking' teachers in general:

2010.04.01 The Hanguk Gyeongje: "It Doesn’t Matter Even if English Teachers are Criminals?"

I noticed that the SBS article linked to at the Marmot's Hole had "학원원장 둔갑" in its title, suggesting that he 'turned into' a hagwon owner in the same way the fox with nine tails takes the shape of a human, which was illustrated in this Donga Ilbo cartoon last March. 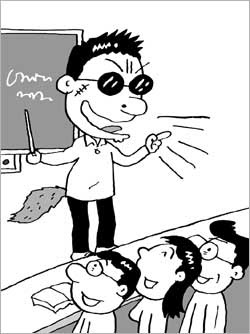 This incident has also given us some new cartoons - always a cause for celebration! This one is from the Chosun Ilbo: 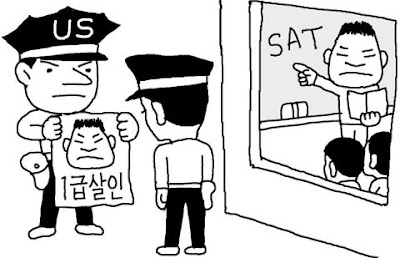 For a change it makes quite clear the person in question is Korean. One might worry for the safety of the suspect, however, since the threat of the American police officer deliberately or accidently gouging the suspect's eyeball out with his nose is ever present.

A bizarre editorial appeared in the Hankook Ilbo which started with the Rodney King beatings and ended with this:

Local police estimate that of the 30 or so Asian gangs in the L.A. area, 40% are Korean. As well, shootings and murders by teenagers are never ending. It's so bad that at one time there was an ad campaign in LA's Koreatown called 'Stop the Killing.' The incident in which the owner of a famous hagwon had been a gangster was shocking, but in fact there was a similar incident last year. Every year more than 100 Korean gangsters enter the country, and their running of narcotic distribution in Gangnam and things beyond that aren't really news. One would expect there is no little anxiety for parents who struggle to send their children to the US only for education.

The portraying of Korean gang members as threatening is certainly interesting. And a fair enough point was made about this happening last year, though no possible solutions are suggested (though considering that the solutions usually suggested are to strengthen E-2 visa issuance procedures, that might not be a bad thing). This simple cartoon accompanied the editorial. 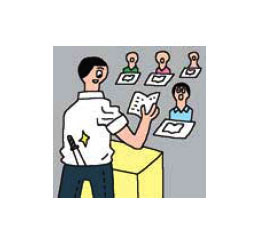 There's not much of interest there - the knife in his back pocket is a pretty obvious addition. But as the teacher has no nose, he has also been pretty clearly depicted not to be a westerner.

In this case, the fact that a Korean American used the identity of a Korean citizen has made it pretty difficult to make a connection to E-2 visa holders (as has his status as a hagwon owner).

Mind you, the Segye Ilbo has shown that making a connection is merely difficult - not impossible.

[Editorial] Who is teaching our children?

There is a hole in the management of native speaking English teachers. Two days ago an SAT hagwon owner arrested by police, Mr. Kim (33), was found to have been a Korean American gang member who shot and wounded two Mexican gang members in Los Angeles in 1997. Pursued by the US police, he fled to Korea and used another person's resident number to establish a new identity. In 2002 he started working as an English instructor in a Gangnam language hagwon. A gangster wanted for attempted first degree murder taught English to children for ten years.

With only a high school education Mr. Kim claimed he graduated from a top US university and attracted students. He also employed many unqualified instructors. Mr. Kim's case is but the tip of the iceberg. Throughout the country, there are many unqualified, shameless instructors. The number of drug taking, alcoholic, or child molesting crimes committed cannot be counted.

The number of native speaking instructors taking advantage of the English craze is increasing, but their management and supervision by authorities is still moving at a snail's pace. The legal means to stop their crimes is riddled with holes. A system to prevent unfit instructors from ever setting foot here must be hurriedly implemented. Mr. Kim used a fake resident card and passport to go on 17 overseas trips. If there were no gaps in the law, Mr. Kim would not have been able to do so well for himself.

The reality of the private education market is that a supply of competent native speaking instructors is needed. Nevertheless, this anti-educational situation in which those teaching our children do not know how to teach should not be ignored. It's worth considering that native speaking instructors should have received the minimum amount of educational knowledge. As a first step towards globalization it's urgent to rectify this situation in places of English education.

"There is a hole in the management of native speaking English teachers." I don't know how many times I've seen that sentence at the beginning of articles. Perhaps it's taught at journalism school? It's also frightening to realize Mr. Kim's case is "the tip of the iceberg." It seems there are scores of wanted foreign criminals coming to Korea, stealing Korean people's identities and opening hagwons. I hope everyone manages to avoid the "many unqualified, shameless instructors" who can be found "throughout the country," committing countless "drug taking, alcoholic, or child molesting crimes." And the invocation of globalization in the last line makes no sense at all.

What a bunch of garbage.
Posted by matt at 4:55 PM

Sure they can. There's not that many of them. Unless he means he doesn't know HOW to count?

@ Darth I think its more likely that they are too lazy to count.

So 9 tails are better than 1 tail, how is that?

"...however, since the threat of the American police officer deliberately or accidently gouging the suspect's eyeball out with his nose is ever present."

Oh S***, I finally got it, the cop wearing the US hat has a VERY LONG and POINTY NOSE that could do damage.

Darth and Monty,
It's that if they did count Koreans(men) might be shown in a negative light so any dumb A** can figure out that counting ought not be done/avoided at ALL costs.

Koreans and their supposed math ability(skills) are FAR overblown in the name of Xenophobia. It's OKAY to ignore math skills to make WAGOOKS look like the scum of the earth and Koreans as though they are on top of the world.

One must admit that we are reading about these K-American/Canuck criminals becaue they have been caught. Something is starting to be done I reckon. To be honest, I think SK needs to get rid of the F4visa or give it far more restrictions. It is great to see these outdated ideas of an innocent and good-by-nature [South]Korean "race" biting the K. govt. in the bum.
Let's hope more gets done to fix this problem--and that all E-2 teachers aren't blamed in the process.

The F4 visa is not the problem. The problem lies with not requiring non-E2 teachers to submit the checks required of E2s.

TEACHERS should be checked, regardless of visa or nationality, not limited to the E2s.

Course, having a "Korean" steal someone else's Korean identity to get around the checks is not something you can prevent.

Fortunately, gangs in the Los Angeles are not as numerous or as violent as they once were. Korean-American street gangs are almost unheard of in LA these days. They don't have any tangible presence anymore.

I can't speak for the rest of the country, because I know in other areas in California (such as East Oakland) gangs are still very much a big problem.