As it was mentioned in the article I posted yesterday that "it's estimated that there are 25,000 native speaking instructors staying in Korea," I decided to look into that estimate. Below are statistics (from Immigration, which I first mentioned here) showing the total number of foreigners in Korea (which surpassed 1.3 million in March) as well as the total number of E-2 visa holders (of course, counting only E-2s does not give the total number of teachers, since F visa teachers aren't included). Note that the E-2 has now been split into three categories:

The E-2-91 was started last July (and currently totals 5 people), and the E-2-2 last August. It doesn't show the total number of public school teachers, only those who have received visas since last August. If you could get a hold of statistics for the total number of native speaking teachers in the public school system on a monthly basis, you would be able to get a better idea of just how many teachers are renewing their contracts. At any rate, the chart below shows some interesting trends. 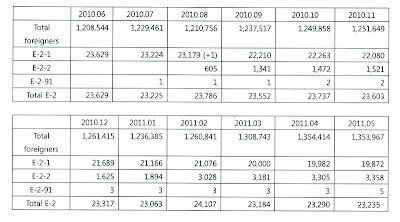 Or here's the increase in graph form: 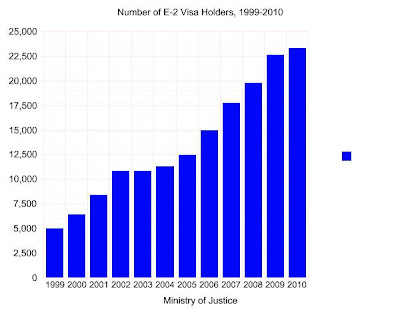 Here's a comparison of female to male E-2 visa holders: 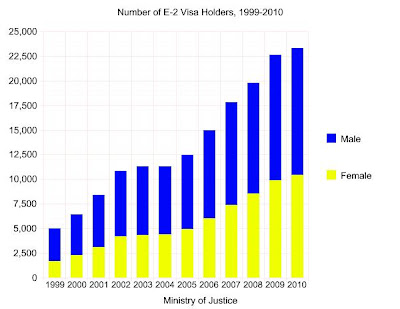 The decrease over the past 12 months in the number of teachers may be related to plans by regional education offices to reduce the budget for native speaking teachers in schools (matched by calls to "re-examine" their placement there). This may well be the peak in terms of numbers for foreign English teachers in Korea, as the bulk of the increase in numbers over the past five years has been due to the massive push by the public school system to put a native teacher in every school.

As has been announced on their homepage, Anti English Spectrum is now pushing to undo this and use only domestic teachers for the sake of their inability to get over photos of foreign teachers taken with Korean women which made them feel such "unendurable humiliation" that even now, six years later, they spend all of their free time trying to boot as many western men as possible out of the country by portraying them as child molesting, drug addicted sexual deviants the education budget and children's 'safety.' I'll probably have a translation of what they've been up to (and their new purpose statement) next week. Who knows what government agencies will court them and do their bidding this time? Only time will tell.

For those who are curious about the situation on the ground for E-2 visa holders in October 2007 (when AES scored their biggest victory by being invited to the immigration policy meeting where the Ministry of Justice officials decided to implement the HIV and drug tests AES had been calling for for the past year or two), the immigration site has a report (in Korean) here.
Posted by matt at 11:58 AM

Another great article! I always enjoy your posts about immigration. Keep up the great work!

It's also worth mentioning that E-2 visas are not strictly for English teachers. I know French, Spanish, Japanese and Chinese speakers who are on E-2 Visas as well though they comprise

Really, so few? I would have imagined the numbers were around 100,000.

A very interesting article.
Glad I came across it.
Steve, Seoul, E2