I was searching for something else (as always) when I came across this page about the 1949 book Irma and the Hermit: My Life in Korea by Irma Tennant Materi, the wife of an American officer serving in the US Military Government in Korea. Truth be told, I hadn't imagined dependents were brought over at that time. I had a chance to skim through some of it today and found that, among the complaints about maids (and other aspects which got a thumbs down from this brief review), there were some pretty fascinating pages. It goes some of the way towards answering questions I posed about relations between American soldiers and Korean women in this post, and serves as a prequel to it. 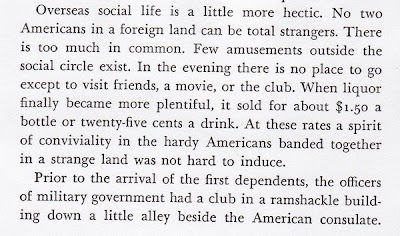 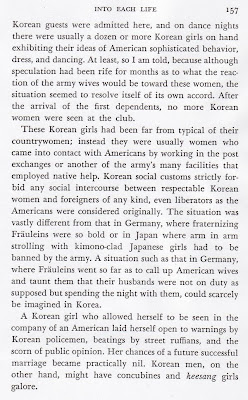 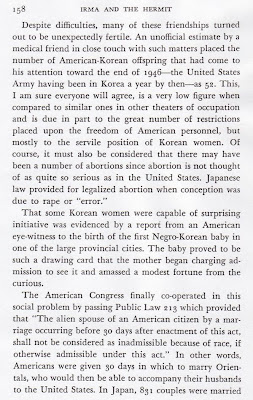 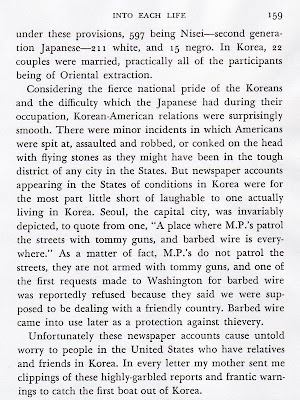 So, more tales of the "warnings," "beatings" and "scorn" that awaited Korean women seen with foreign men, and a figure of at least 52 babies conceived in the first 6 months of the US occupation. And that story of the first "Negro-Korean baby" - wow. I doubt subsequent children of such parentage proved so "lucrative." Also interesting is being reminded that interracial marriages in the US were illegal. I also wonder, if most of the 22 couples married in Korea were of "Oriental extraction," what exactly that extraction was. And then the tales of Americans being spit at, assaulted and robbed. All in all, a pretty eventful three and a half pages.
Posted by matt at 10:02 AM