[Update]
This posting about the atomic bombings of Hiroshima and Nagasaki is also interesting:

Unlike many other bombing raids, the goal for this raid had not been a military installation but rather an entire city. The atomic bomb that exploded over Hiroshima killed civilian women and children in addition to soldiers. Hiroshima's population has been estimated at 350,000; approximately 70,000 died immediately from the explosion and another 70,000 died from radiation within five years.

I imagine the writer would be shocked to learn 67 cities had already gotten the same treatment.

Also, the Wikipedia page on the bombing of Tokyo has several photographs and maps. 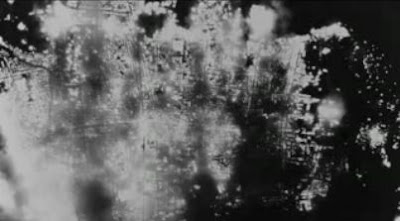 There was an interesting omission in a Yahoo News article I read today:

Nuclear radiation is an especially sensitive issue for Japanese following the country's worst human catastrophe -- the U.S. atomic bombs dropped on Hiroshima and Nagasaki in 1945.

I'd tend to think that attacks on two cities - even atomic attacks - paled in comparison to the firebombing of 67 Japanese cities in the spring and summer of 1945. I was out with a Canadian and an American who were both nuclear refugees from Japan on Saturday night and the topic of how the firebombing of Japan had been pretty much forgotten in the west came up. My sister taught in Oita ten years ago and wondered if the city had been bombed during the war. I was never able to find out until I watched The Fog of War, which can be seen here. The firebombing of Japan is discussed for about 8 minutes starting around the 33:00 point. At one point it lists all of the cities bombed along with the percentage of the city destroyed (Oita's figure is 28.2%). Obviously having a lot of time on my hands, (predating this blog) I decided to make a map. It came up in discussion the other night, so I'd thought I'd post it - I just didn't expect the omission mentioned above to appear as I was doing so. 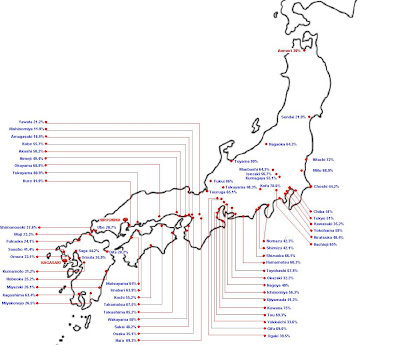 I wonder to what degree the firebombing is dealt with in Japan's memory of the war. As Michael Hurt reiterated recently, the memory of the atomic bombing of Hiroshima and Nagasaki - the only time nuclear weapons have been used on civilian targets - has allowed Japan to portray itself as a victim, so I'm curious if the firebombing has been downplayed at all in Japan, or in its presentation of its history to outsiders. Certainly, when westerners think of firebombing, Dresden or Hamburg come to mind - suffering firebombing wasn't a unique experience, even if was used to far more devastating effect in Japan.

This also brings to mind how the bombing of North Korea during the Korean War has been forgotten as well, though in the North's case, as Brian Myers has argued, it has also been omitted in North Korea's portrayal of the war to its own people, as massive bombing doesn't quite gel with the concept of Kim Il-sung being a protective leader and skilled general.
Posted by matt at 1:07 PM

About ten years ago, I spent a month in Tokyo and at one point I wandered off the subway and into a big museum that was mainly concerned with the Edo period (not sure exactly where it was). One entire wall was covered in a map of Tokyo, and in front was a panel of buttons with dates next to them. If you pressed a button, it would light up the part of the map that had been firebombed on that date. There wasn't much of Tokyo that didn't light up at some point. It made quite an impression on me.

I think it's minimized in the Western press - in favour of the narrative of a quick, surgical blow that ended hostilities decisively - but I'm not familiar enough with WWII, really.

WWII: Japan and Germany received a great deal of bombing. Only two bombs contained radioactive material and they were dropped on Nagasaki and Hiroshima.

S:
The city museum in Dresden made a similar impression on me. I made a point of visiting Dresden after writing an essay on its firebombing in university. There were scale models of the city center in 1933 and 1989, and despite knowing a lot of the background, I was still amazed as I walked back and forth between the two displays, which made clear just how much of the city was destroyed.

Michael:
Reading the post again might allow you to extol more of the point I was making. To make it clear, the news report stated that "the country's worst human catastrophe" was when the U.S. dropped "atomic bombs...on Hiroshima and Nagasaki in 1945." I'd figure destroying an average of around 50% of 67 cities and causing around 500,000 civilian deaths would rate as the "the country's worst human catastrophe." If the article hadn't used that phrase, I'd have had no problem with it.

I reckon being a "victim" of atomic bombing elicits more sympathy from the usual crowd. And for decades the Soviets and their fellow travelers used Hiroshima and Nagasaki as examples of US/capitalist barbarism. Who knows how successful this smear job was? May have bought the Soviets and the PRC enough time to develop their own nukes, thereby reducing the likelihood of a US first-strike. Had Uncle Joe nukes first I wonder what he would have done.

Recently younger Germans have grumbled about the firebombs dropped on their nation during the war. Some call it a war crime.

seouldout:
I don't know much about the subject, but (parts of) the German left have attacked criticism of RAF and USAF firebombings during the war and criticism of mass expulsion of Germans as attempts – most notably by the far right – to establish a narrative omitting or diminishing what led to these reactions, namely most Germans' active support or complicit approval of German aggression and war crimes – at least an undeniable lack of significant resistance.
In this respect, the previously more anti-American (and anti-Israel, I might add) German left now differs a lot from the South Korean left where anti-Americanism seems to be a major element.