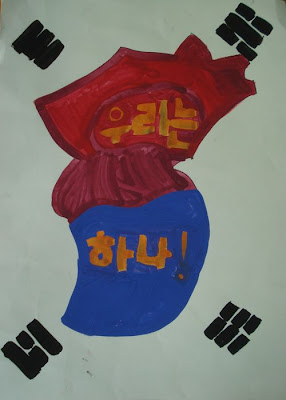 Students in a grade 5 class at my school made these North Korea-related posters recently (post Cheonan sinking). They all stress the one-ness of Korea and there's nothing negative to be found about North Korea in any of them. The most elaborate is this comic strip-style poster: 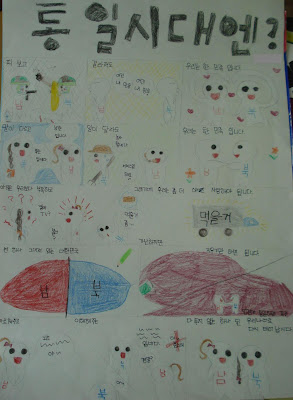 Here are a few panels close-up: 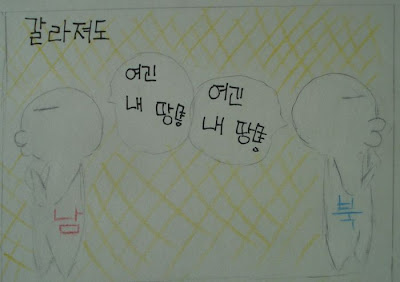 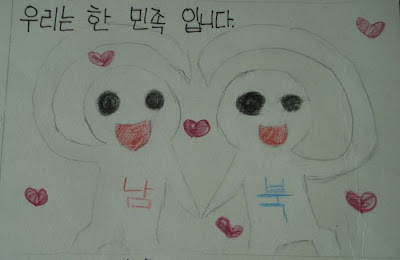 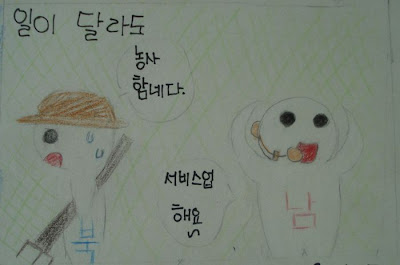 [We have] different [kinds of] jobs; farming, service jobs. 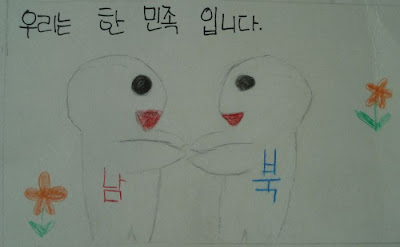 We are one minjok.
It goes on to show North Koreans starving and South Koreans sending them food, and ends with this: 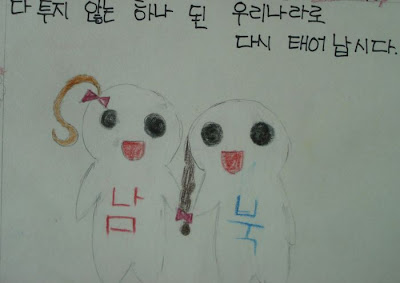 Let's not fight, become one, and let our country be reborn.
I thought the break down of the different jobs North and South Koreans hold was interesting. Here are a few others: 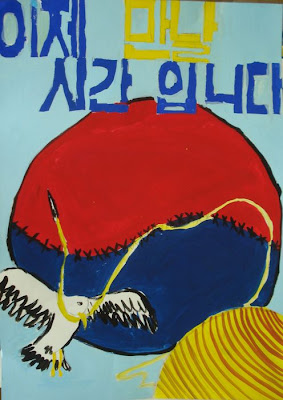 Now is the time to meet. 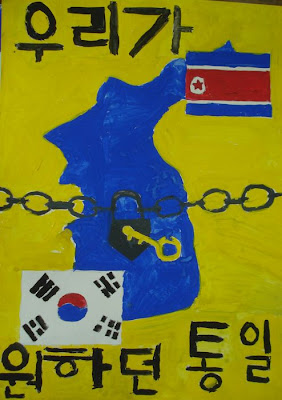 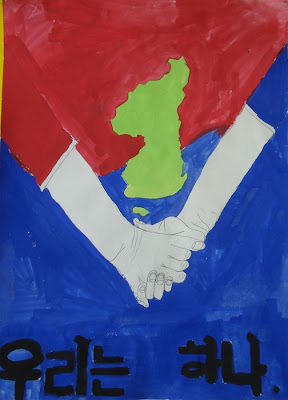 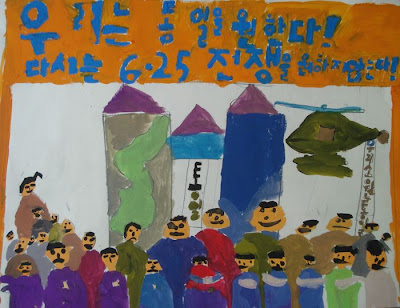 We want reunification! We don't want another Korean War! 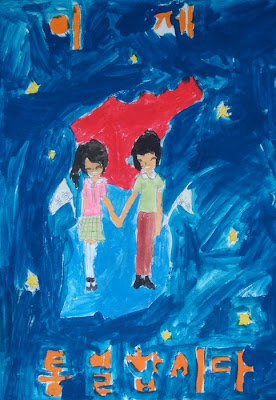 Let's reunify now
I can think of something else that's also broken in half, but I imagine putting the Cheonan on one of these posters wouldn't be too cheerful. I'm rather curious as to when the demonizing of North Korea stopped in schools (older people have mentioned being told the North Koreans had tails), and the 'We are one, we want reunification' education began. I remember at the hagwon I worked at in 2001 the kids wrote letters (in English) to kids in the north, many of which mentioned 'I like Starcraft.' One imagines the fate of those letters was the same as the letters taken up on the space shuttle in the Simpsons episode where Homer becomes an astronaut, where we see a canister labeled "Children's Letters to God, To Jettison." At the time (2001) it was still illegal to display a North Korean flag (though I wondered where the right wing groups got the ones they burned from), and when I had kindergarten kids color flags from around the world (including the DPRK's), some of the (Korean) teachers didn't know what flag it was.
Posted by matt at 8:54 AM

had a teacher correct me about the way I talked about Korea and Koreans when I was talking to middle school students. She was annoyed, I think, not at me but at what the children were saying.

She insisted after the discussion "you should know Koreans do not see The North as part of Korea."

The kids were concerned for Koreans there. At least that's how I remember their discussion going. It all began because of a book I was reading at the time.

I have vague notions of the Korean Teachers and Educational Workers Union working to promote this view in the 90's.

The naisen ittai Japanese propaganda poster you posted earlier and the student's drawing of the "남" and "북" brothers hand in hand with the words "우리는 한 민족 입니다." (We are one race.") are identical: the linked and arching arms, the printed characters on the chest, the written message of "we (two countries) are one race" across each page. Carbon copies.

Damn - that's a great connection you've made there.

I'm sure there was also a time when young kids in China drew similar pictures of Chinese (Han or non-Han)and Koreans as being "one race" similar to the Japanese colonial era minzoku pictures.

Funny how politics tends to determine ethnic origins.
(US Americans, I'm looking at you too)