More on the Yongsan redevelopment

Update:
Jon Dunbar - who explored and photographed Yongsan District four two months before the January 20 incident - writes about it and posts photos here.

Yesterday I linked to the first Korea Herald article in a series about the redevelopment project in Yongsan which led to six deaths a year ago. The second article in the series, looking at the project more from the city's point of view, can be found here. It makes the distinction between compensation for people living in the area, and compensation for people who have businesses, with the rights of the latter having little support from the government.For example:

A spokesperson for the Seoul Housing Renewal Division who requested anonymity, said there is a related law stating that business owners should be granted compensation. It's called The Acquisition of Land, etc. for Public Works and Compensation Law. It says that compensation for displaced business owners should be determined according to profits. He also said it's up to redevelopment organizations to follow the law.

So according to this there is a law, but it's optional for developers to follow it. Golly, that's shocking.

The first article had this quote: "The walk through the redevelopment zone is unreal. Picture Seoul, circa 1951 - indiscriminate destruction." This reminded me that I took some photos of the area back at the end of May (the same day I took some of the photos in this post). Below is a satellite photo of the area. The building marked is the one where the deaths occurred, and the large block around it the area to be redeveloped. The apartments at bottom left are visible in many of the following photos. 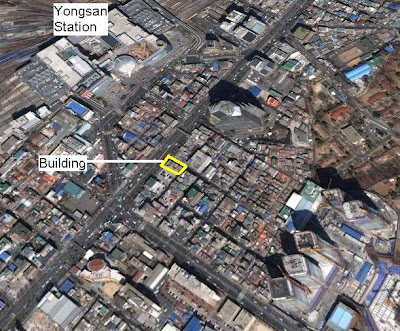 Walking out to Hangangno from Yongsan Station, you can see the building where the standoff and fire took place that killed five protesters and a police officer: 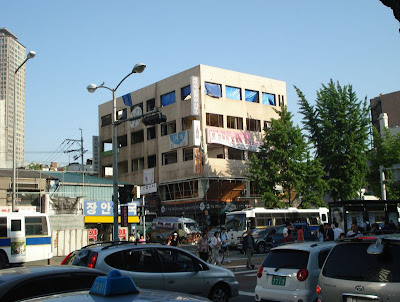 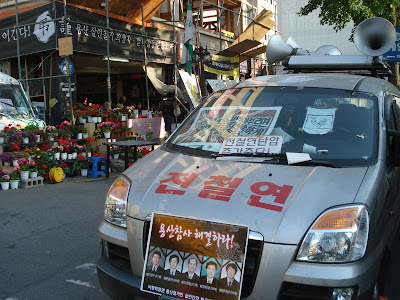 The memorial was still there, along with riot police. It's pretty obvious Eric Drooker influence on the poster below. 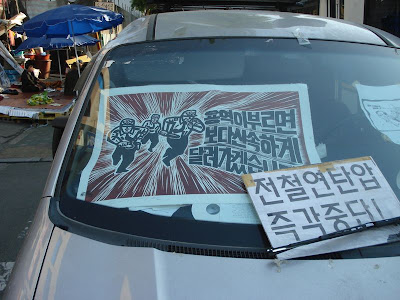 Walking east from the main street next to the burnt out building: 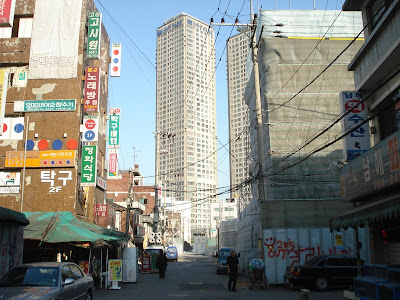 Above you can see the green canopy at left; this is a view down that alley:

Further up the street is this home: 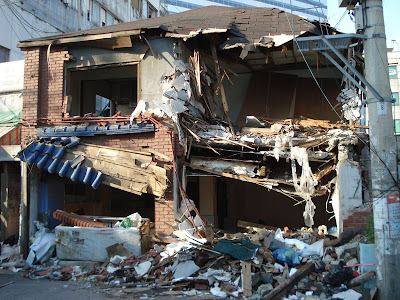 The same house seen looking back the way I'd come: 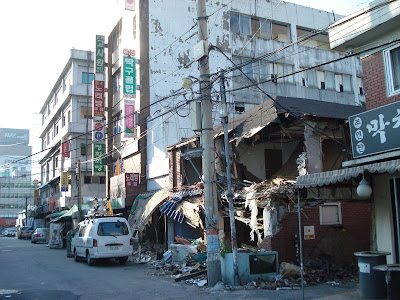 Continuing to walk east, these apartments dominate the skyline, and are a harbinger of the area's future shape: 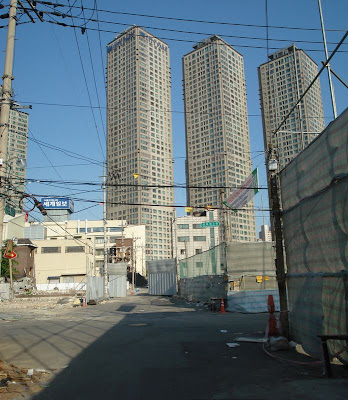 Looking through the 'blanket fence' seen at far right above is this view:

The street beyond the fence seen at far left above looks like this: 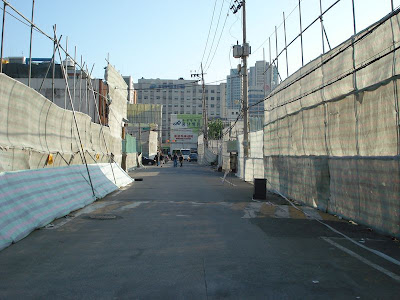 This was as far east as I could go (looking northeast) before I was told to stop taking photos: 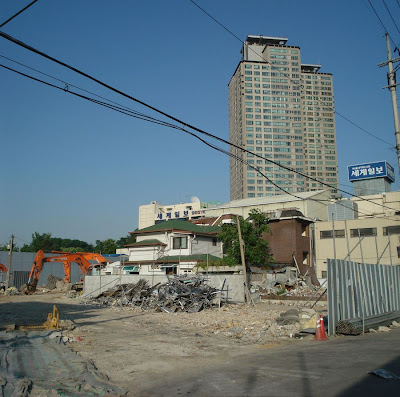 I walked back a block and climbed the stairs into this place: 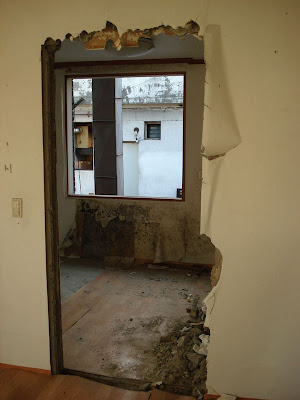 Here was the view from its balcony, looking east, which gives a pretty good idea of the swath of destruction cut through the neighbourhood:

I then walked south along the street seen at bottom right above, and headed west for a block before looking north and taking this photo. The burnt out building is on the right: 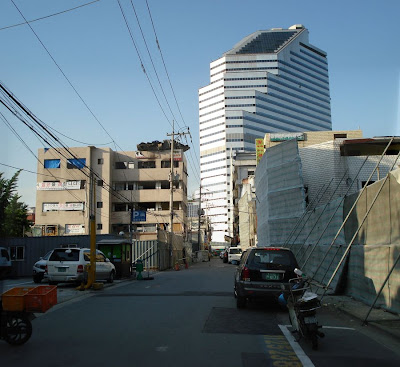 Looking south from that vantage point is the former Yongsan Railway Hospital, which Robert Koehler looked at in detail here.

Of course, as Robert noted here, this historical building may also be destroyed...
Posted by matt at 11:06 AM

I work in the big building seen in the penultimate photo (although I didn't this time last year.) I want to know when they're going to get rid of the red light district on the other side of the road... People who've worked here a while, tell me there is a real dearth of places to eat nowadays...