It's amazing how 22,000 missing English teachers reappear when you use the right statistics

I haven’t had time to post much this summer, but it dawned on me the other day that there are several things related to the E-2 visa issue that I never got around to posting back in June, so I’ll address some of them today.

On June 5, the Chosun Ilbo (Korean) reported on Ban Ki-Moon's comments recommending Korea abandon it's HIV immigration policy (the article mentions the visa requirements for foreign teachers as an example). The Korea Times also reported this.

June 19 saw the submission of a letter to the National Human Rights Commission by Human Rights Watch, which can be read here.

Another thing I never got around to posting is that I was right about this.

When Choi Young-hee submitted her three bills regarding foreign teachers to the National Assembly, she said Korea had a total of 38,822 E-2 visa holders in 2008, but that 22,202 were not accounted for. I knew she had the wrong figures, and by searching through the immigration website, I finally found immigration statistics of many types at its English language site.

Just to confirm that I was correct, I sent the excel files to Benjamin Wagner, who contacted immigration. They confirmed that Choi’s office had made a mistake, and they weren’t too pleased with having been accused of losing 22,000 E-2 visa holders.

Others have made similar mistakes. The Joongang Ilbo used the wrong statistics in its chart here until they were corrected recently after Ben Wagner contacted them. 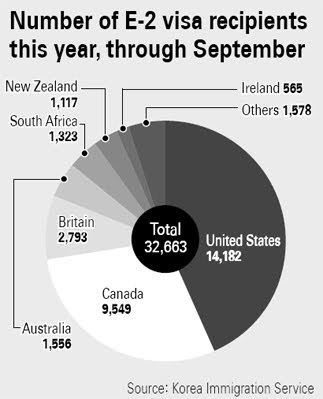 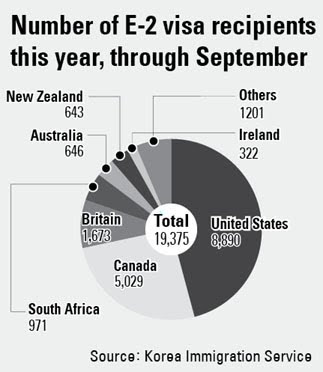 Y' know, you'd think that a member of the National Assembly - with all the aides and support that entails - would check a little more carefully before going to the media with information that could potentially panic people and make a government ministry look bad. Also, it strikes me as worrisome that a member of the National Assembly had to be corrected by an English teacher with a blog and a foreign law professor. On the other hand, you can be certain that the media isn't going to double check this stuff. If we don't do it ourselves, who will?
Posted by matt at 4:57 PM

You will! Wow.you were the man who corrected it? That's why we shouldn't believe everything the media tells us.

Part of the problem is that National Assembly members can easily get some media attention just by having their offices release some statistics. The media pretty just write up a press release for them, uncritically passing along whatever the numbers are and the spin the Assembly member puts on them.