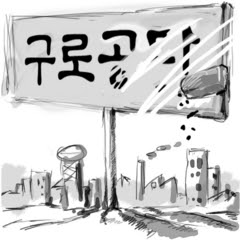 The Guro Industrial complex was built in the mid-to-late 1960s and became one of the main areas in Seoul where textiles and wigs were made, mostly by young women, for export. 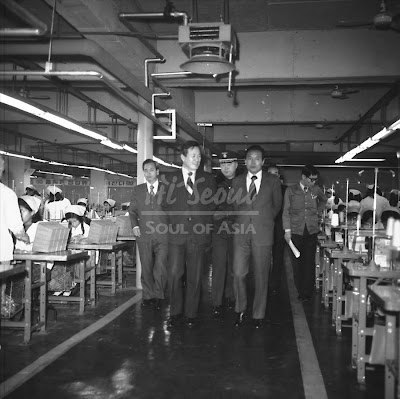 The photo above was taken in November of 1974 (more can be found here). The Garibong-dong area southwest of the industrial complex has changed somewhat since that time, however, in both appearance and residents:

After the blue-collar workers and democratization protesters who initiated the country’s labor movement in the area left to pursue better jobs, jjokbang, cage-like rooms built for the factory workers, became filled with migrant workers, mostly from China, looking for cheap rent and daily manual work. As of December last year, about 15,000 ethnic Koreans from China had registered at the district office, followed by 637 Chinese, 232 Taiwanese, 208 Malaysians and 153 Filipinos, according to district office data. If illegal aliens are added, the office said, there are about 20,000 foreigners in the area.

Another Joongang Ilbo story tells about the improving relations between the Koreans and Korean-Chinese living in the area (though there may be the odd incident). The only reason anyone outside of Korea might know about Garibong-dong would likely be due to the fact that it was the setting for the 2001 Im Sang-soo film Tears.

Below is an aerial shot of the area south of Yeouido and Yeongdeungpo station taken in 1966. The Guro Industrial Complex (which was about 500,000 square meters) is at bottom left. Notice the farmland still present at that time (click to enlarge). 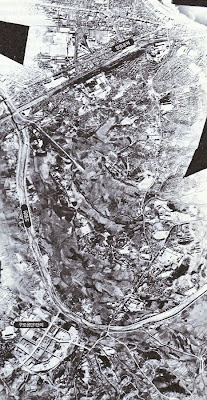 Here is the same area today. It's a little more urban. 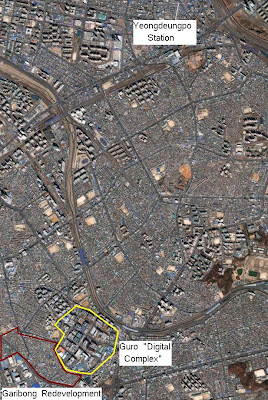 The area outlined in red needs some explanation. This 2003 article finishes with the following lines:

But many of the old textile factories and assembly lines have recently been replaced by high-tech start-ups and other cutting-edge industries. Most of the Korean- Chinese are unskilled, which means, some say, their days of working here are likely to be numbered. 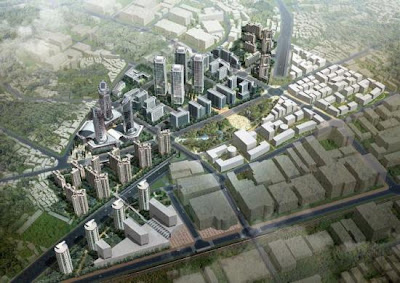 A rendering of the new development. Bye Joseonjok Town.

On July 9, Guro’s district government announced that a city committee had approved its plans to change the name of the road in Guro 3-dong from Gongdan-ro to Digital Danji-ro, wiping away the name that evokes an industrial complex and replacing it with one that suggests shiny new technology. The subway station in the district was given a new name in 2005. Today, you can call it Guro Digital Complex Station. Its old name, Guro Industrial Complex Station, will be wiped off the map.

The district seems dedicated to covering up its unflattering past as the home of manual workers at textile, wig-making and printing plants from the 1960s to the 1990s.

Reading about the name changes, of the desire to wipe away the past, reminded me of Antti's post about the desire of residents in nearby Sillim-dong and Bongcheon-dong to change the names of these neighbourhoods, due to their association with the poor hillside neighbourhoods of the 1970s and 80s (or even later). In one bit of irony, he cited Guro's efforts to efface its past as precedent for such renaming. Also ironic is that Korean-Chinese are beginning to settle in Sillim-dong.

Sillim 4-dong, jammed with flats and small apartments, has two or three stores that specialize in ingredients for Chinese dishes. There are more than 10 traditional Chinese restaurants with Korean-Chinese chefs, and many of the customers are actually Korean-Chinese.

"The number of people coming to Korea from China has increased since 2003, and people favor working in the service field instead of manufacturing sectors," said Kim Yong-pil, the chief editor of "China-Korea Town News."

He explained that the Garibong or Guro areas were favored because they had cheap rooms and the Chinese first started working at factories in the areas. Since the Guro Industrial Complex became a digital complex, it doesn't attract that many Korean-Chinese anymore.

It's understandable that Guro's district office wants to create a new 'brand' for the district and move in a 'digital' direction (and wash away those memories of wig factories) but it's interesting that one of the best-known foreign enclaves in Seoul is being razed. Is this the typical redevelopment at the expense of the poor we see in Seoul regularly, or, with the central government resettling North Korean refugees in ways that discourage the formation of North Korean 'ghettos', is there more to it than that? This Chosun Ilbo article from a few months back lists a number of foreign enclaves in Seoul. What's interesting is that Changshin-dong, where 'Nepal town' is, will become a new town in the near future. The plans for the new town pre-date the influx of Nepalese restaurants, however, and are likely more a response to the remnants of the (still active) textile sweatshops there than anything else.
Posted by matt at 1:44 AM

Just wondering if you can point myself an others in the direction of some English language info regarding Ansan City Hall's plans to redevelop the Wongok-dong neighborhood adjacent to Ansan Station.

I gather that Ansan City is going down a similar path of keeping all public consultation to an absolute minimum, and are unconcerned with changing the character of the area of the area holus-bolus in order to achieve the ever shining goal of development!

As an aside, I always find it confusing/frustrating/amusing when articles like the final Chosun Ilbo article you link to focus entirely on the City of Seoul. WTF?!? Minus the U.S. servicemen and sundry military and consular administrative staff there's far more foreigners living outside Seoul than in it. Daehangno a Filipino enclave?!? Itaewon is little Nigeria?!? I guess its time for me to get my eyes checked again.

Why don't they pick their heads out from between their bum cheeks and take a look at where the real action is?