An update can be found here. 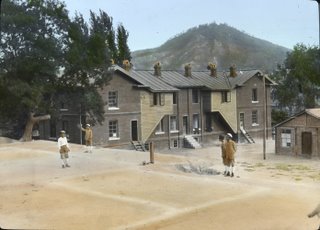 Paichai Dormitory
In Seoul, 20th Century: Growth and Change of the Last 100 Years, a description of the development of Jeong-dong can be found. Speaking of the street improvements of 1896 (which Isabella Bird Bishop wrote about - here and here), Jung-Mok Sohn writes:

One thing that needs to be mentioned here is that Seoul at this time was improved in a Korean way, not in European manner. Jeong-dong, however, was an exception. Jeong-dong was allotted for occupation by foreign diplomacy offices and missionary organizations. Were it not for Gyeonggunggung [Deoksu] palace at its center, it would look completely non-Korean. Most Korean residents who once lived there sold their houses and moved away. Wide roads were built and shops run by foreigners moved in. The French legation was built on a hill and competed in magnificence with the Russian legation building. A Methodist church of redbrick was erected by an American mussionary organization around the time the legations were constructed; the church could be seen from all directions. [p 435] 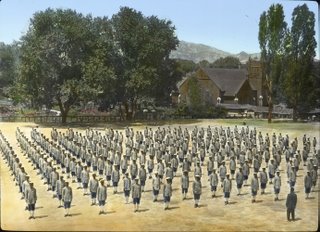 Pai Chai drill grounds, possibly with the church in the background?
To get a glimpse at what life was like on "Legation Row", as Jeong-dong was known, in the early 20th century, one need only browse through The Reverend Corwin & Nellie Taylor Collection (which was linked to over at Frog In A Well). The collection consists of photos taken between 1908 and 1922 of Seoul, Pyongyang, Wonju, Kongju and Suwon, as well as of Korean rituals and daily life at the time. As the photographers were Methodist missionaries, there are many photos of the Pai Chai school (Romanized as Baejae these days) and the Ehwa girl's school, which they must have been involved with considering the number of photos of these two schools that turn up. 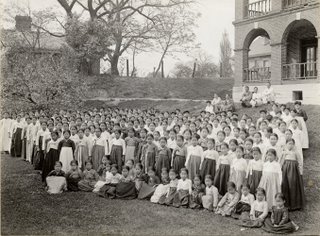 Lower level classes at Ewha
According to this,

Mrs. Mary Scranton established the first school for girls in 1886 with only one student. However, Queen Min supported the school and named it Ewha Haktan, Pear Blossom Institute, in 1887. Rev. Henry Appenzeller opened a school for boys which King Kojong named Paichai Haktang, Hall for Rearing Useful Men [this link says it was opened in December 1886 and translates the name as “School to Nurture the Talent,”]; and that same year Rev. Horace Underwood organized an orphanage and school as part of his missionary work.

Looking at these photos, it's incredible how spacious the surroundings of these schools look, when they are actually within a rather small area; the legation/missionary area of Jeong-dong was about 500 by 600 meters, including Deoksu palace. To get an idea of what the area would have looked like 15 years after the Taylors left, this map (a detail of this one) may be of some use: 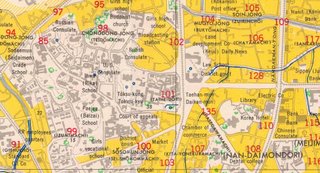 For a description of the area at that time, we can turn to the article An American Boy in Yesterday's Seoul : "Golden Days" Fondly Recalled in which Horace G. Underwood remembers his school days in the 1920s (and which is well worth reading in its entirety):

School for us was the Seoul Foreign School, then located in Chong-dong, where the Franciscan Fathers now have their center. The school was also a sort of community center with its "Morris Hall" auditorium on the second floor. Seoul Union Church met there on Sundays, for a time movies (silents, in those days) were shown by Mr. Morris on Saturday evenings, and the Hall was used as a matter of course for many gatherings - meetings, plays, recitals or what have you. Just down the street next to the American Consulate, was the Seoul Club, the recreation center for the business community, and although the Seoul Union Club had by this time moved to a new site just outside Sosomun (Little West Gate) it was still within the circle of "Legation Street" access [The road from City Hall to Sosomun did not exist then].
.
Other western-related institutions on the street included Ewha School, the Methodist "Grey House" residence, Paichai School, and the offices of the Singer Sewing Machine Company (now owned by the Kyunghyang Shinmun), while nearer the Seoul Foreign School were the Russian Orthodox Church (MBC Building now), the offices of J.H. Morris and Co., and around the corner were other foreign firms, while not far away were the offices of Shell and Standard Oil. Some "White Russians" lived in the Russian Orthodox Church, and a Belgian lady, Madame Boutant, had a dress shop right across from the SFS gate. On the corner about where the gate to the Chong-dong Methodist Church is located stood a two-story building that housed the community's principal tailor, a Chinese.

As I mentioned, and as the map above shows, Jeong-dong also contained Deoksu palace, and its history in relation to the foreign compounds (and vice-versa) is rather interesting. 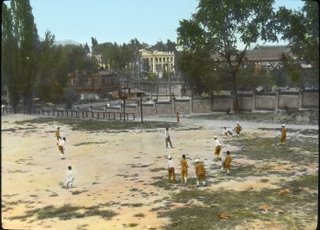 Pai Chai athletic field, Deoksugung in the background
The palace was first built in the late 1400s or early 1500s as a residence for the current King's brother, Prince Wolsan, but was used as a palace (beginning with King Seonjo) for 30 years after the 1592 Japanese invasion left the other palaces in ruins (ruins, it should be mentioned, caused by Seoul's citizens, who were mighty pissed off that their king decided to flee and leave them to their fate, setting fire to the palaces - not the Japanese troops). When Changdeok palace became the new royal residence in the early 1600s, Deoksu palace fell into disuse. This continued through the 1800s when Gyeongbok palace was reconstructed, but the takeover of that palace by the Japanese during and after the 1894-95 Sino-Japanese War (during which time they had Queen Min killed), led to Gojong fleeing to the Russian legation for protection in 1896. As this article tells us,

Gojong's sojourn in the Russian legation lasted only a year until 1897 when Japan and Russia agreed to send Gojong to Deoksu Palace. It was at this point that Gojong declared himself Emperor of Daehan. Russia's influence remained paramount until her defeat in the 1904/05 Russo/Japanese War.[...]

Ancient blueprints of Deoksu indicate that the palace was much grander in scale than it is today. From 19th century onwards, the area of the palace site was gradually reduced to less than half, with numerous buildings destroyed in the process. Events that contributed to the deterioration of Deoksu Palace were the allotment of a significant portion of the palace site to accommodate the British and Russian legations in the 1880s, the huge fire of 1904 and extensive urban planning in the 1960s.

The aforementioned fire took place on April 14, 1904, and destroyed most of the buildings (as the descriptions of the palace's buildings here show). 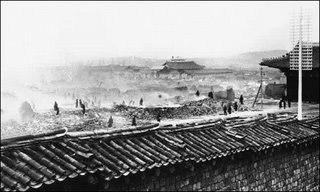 The fire would have taken place shortly after the beginning of the Russo-Japanese war when Japanese troops occupied the country, but I haven't found any definite connection between the fire and the Japanese occupation. The most dramatic change to the palace after the fire would have been the building of Seokjojeon, the western style building, which would have been massive for its time. It was initially built by a British company but was taken over by Japan and finished in 1910. The construction of its West Wing was begun in 1936 and was completed in 1938, when Deoksu palace was opened to the public, and Seokjojeon became a Japanese art gallery; following liberation, the meetings of the United States/Soviet Union joint commission on the future of Korea were held there in May, 1946. A photo of the original, east wing taken in 1958 can be found here. Of course, the photo below (again) was taken before the west wing was built (the photographer would be facing north east); the map above, though made in 1946, was based on a 1937 Japanese map in which the (incomplete) west wing would have been absent.

Besides the fire (and the Japanese takeover), the other factor contributing to Deoksu palace's 'deterioration' was "the allotment of a significant portion of the palace site to accommodate the British and Russian legations in the 1880s". As this interview with Patty Hill, wife of former U.S. ambassador Christopher Hill, reminds us, however, there were other nations taking up residence in former parts of the Deoksu palace complex. The US ambassador's residence, which is now behind the palace, was also a part of this allotment of palace land (do read the entire, fascinating article):

"One of the things I've tried to stress is the unique link that this property symbolizes because not only was it the first property that the United States every purchased outside of the continental United States as a government but it's also the first time that any land in Korea was sold to a foreigner." [...]

The property owned by the U.S. government that encompasses the residence was originally purchased in 1884 by the first American resident representative to Korea, Lucius Foote [and was purchased from him by congress in 1887]...

A long time before Foote's arrival it was believed that Legation House, now the guest house for the ambassador's visitors, housed one or more of the royal concubines.

"The Legation House's structure is believed to go back to the 1600s, and I think that it was the embassy consulate from 1883 to 1905. That was where the first visas were given," said Hill.

There is a belief amongst Seoul historians that the original embassy structure was built in the early 1600s as part of [King] Seonjo's many additions to Prince Wolsan's old palace.

This vignette helps illustrate both the degree to which perhaps Deoksu had become unimportant (really now - housing foreigners on palace ground?) and how the land was sold off to foreign diplomats and missionaries. The flip side of this, however, is that the it was the presence of these foreigners that helped Deoksu palace become important again. The fact that Gyeongbok palace was no longer safe (as it was controlled by the Japanese) led King Gojong to seek refuge in the Russian legation (on land that once belonged to Deoksu palace), and in 1897 the Russians convinced him to make Deoksu palace (right next door) his new home, where he declared the Great Korean Empire (while building Jeonggwanhun, a western-style building with a secret passageway to the Russian legation).

It was a short-lived resurgance for Deoksu palace, however. Once King Gojong was forced to abdicate the throne in 1907, his son was made by the Japanese to make Changdeok palace his home. Gojong would die in January of 1919, and the palace from which he had declared the Great Korean Empire would eventually be turned into a park and art gallery (which was the fate of most of the palaces). 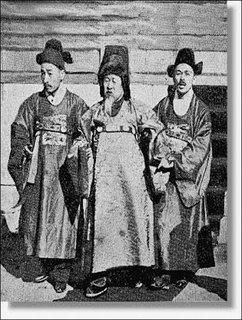 As for the foreigners living in Jeong-dong prior to and during the colonial period, Robert Neff's articles for the Korea Times are worth reading; the essay American Missionaries in Korea and US-Japan Relations 1910–1920 may be of some interest, as might the later history of the Seoul Foreign school.
Posted by matt at 12:19 PM