Photo from the Chosun Ilbo

The passageway through Namdaemun has been opened to the public for the first time in 99 years. As the Chosun Ilbo tells us,

entrance to the national treasure had been forbidden since 1907, when the occupying Japanese government regulated traffic by removing the fortress walls on both sides and putting in a road and streetcar line.

So now, you can see a long hidden painting on the ceiling. "But how do you get over to Namdaemun? Isn't it surrounded by a huge traffic circle?" you may ask. Not anymore! Seoul City, under mayor and presidential hopeful Lee Myung-bak, has not only uncovered Cheonggyecheon and built a grassy plaza in front of City Hall, but as of last May, it has also built a grassy knoll in front of Namdaemun, which allows people to walk up to the gate without fear of certain death. This article describes how Namdaemun came to be left adrift in a sea of traffic prior to the appearace of Sungnyemun Square:

Sungnyemun, built in the seventh year of the Chosun King Taejo’s reign (1398), is the oldest wooden structure in Seoul, but the surrounding fortress walls were removed in 1899 to build a streetcar route. After the destruction of much of the area as a result of Japanese colonial urban planning, the gate had stood on a desolate traffic island, unapproachable to visitors.

So now, you - hold on. 1899? I thought it was 1907 when the walls came tumbling down. Oh well, anyways.... Robert over at From the Nakdong to the Yalu linked to a post about the re-opening of Namdaemun at Max Watson's photoblog. There are lots of photos of the re-opened gate, including the ceiling painting. Further down the page, he's also posted a few historical photos of Namdaemun, one of which I'll post here: 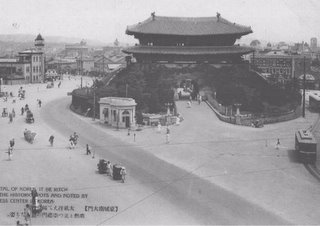 Now, if the doors of Namdaemun have been closed since 1907, then obviously this photo must have been taken before then, as you can clearly see people walking through the gate. My first thought, however, was, "That's Seoul in 1907? Look at all those multi-storey brick buildings. It seems a little too modern looking for that time. I dug up a photo taken from Namdaemun's balcony around 1900: 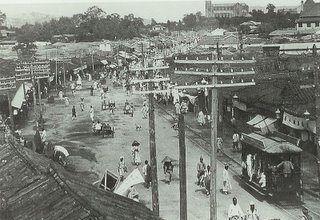 Only two buildings over one storey tall are visible. Still, it might be possible to build that much in such a short time (Kushibo's post on Incheon's modernization (take the quiz yourself!) helped convince me of this). Searching around some more, I turned up photos from the book Korea Through Australian Eyes, which is a collection of photos taken by Australian photographer George Rose in 1904. The latter link has several (sample) photos, including one of a newly created Tapgol Park. At any rate, the three photos at the top of this page are of Namdaemun and the city wall in the vicinity of the gate. Let's have a look: 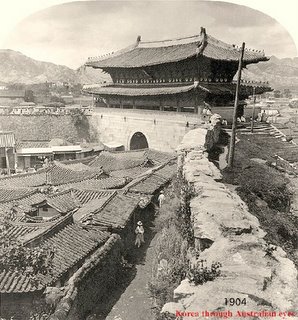 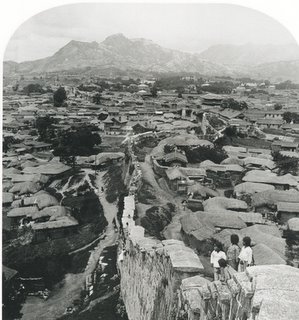 The first photo is easy enough to identify; the second is a view of the city wall snaking towards Seodaemun, taken from Namdaemun. [EDIT - Actually it's Namdaemun seen in the background, taken from Namsan - see comments] As these were taken in 1904, they raise some rather important questions:

Were the walls around Namdaemun torn down, the small houses razed, the entire area paved, and several multi-storey buildings built in the space of just 3 years? Or is the "1907 Photo" (again, below) actually from a later date, when the passageway through Namdaemun was still open? And if it was still open to the public at a later date, why is the city telling us it's been 99 years?

The Chosun Ilbo, above, showed that it was able to give two different dates (1899 and 1907) for the destruction of the walls around Namdaemun. Is the city government also making a mistake? Is it ignorant of its (possible) error, or does "99 years" make for better marketing? As Cheonggyecheon was voted as the best 'brand' of last year, it doesn't hurt to think this way. Is Seoul city playing fast and easy with historical facts to make a more compelling tourist attraction? Are they just dimwits and unaware of their mistake? Or is it I who is mistaken about the pace of Seoul's development between 1904 and 1907? Only time will tell!
Posted by matt at 3:46 AM

I think you're probably on to something there. If I had to guess I would say that picture was taken in the 1920s or perhaps 1910s at the earliest.

That picture was taken after the Japanese forced modernization on Korea after taking over, and also made the Koreans take care of their cultural heritage.

I don't really care who did what first. Thatched rooftops and muddy lanes over electricty and paved tramways anyday of the week.

"The first photo is easy enough to identify; the second is a view of the city wall snaking towards Seodaemun, taken from Namdaemun."

Are you sure of that? I'm not certain, but it looks to me like a distant shot of Namdaemun. I believe Seodaemun's roof had only one low tier.

You're right. The caption below the photo said 'Namdaemun', but for some reason I assumed it was taken from Namdaemun. It would have actually been taken from the lower slopes of Namsan, with Inwangsan in the background (not Bukhansan as I'd assumed). I would have even looked at photos of Seodaemun when I wrote this post, and still didn't notice. D'oh!

I have to check more photos.

Well, I'm going back to my original idea. That is Namdaemun in the distance and the picture is just from some spot along the wall. At Namdaemun I can see a wooden pole nearby and the white roof corner ornament in each picture.

Did you notice in the long shot there's someone climbing up the wall? We can see the footpath in the grass that leads to the spot where people climb over. It looks like a woman climbing up and someone is waiting at top for her. It also looks like one of the girls in the foreground is watching her climb up.
By this time the wall is just an inconvenience?

I'd initially thought it might be taken from Namdaemun and that it might be a intermediate gate, but the photos of secondary gates I have show them to be quite small, so I decided it must be Seodaemun, forgetting it was also single-tiered. But yeah, it's gotta be Namdaemun in the distance - the drop off on the left hand side is a doozy, much more than from the other pics of Namdaemun.

As for kids hanging out, I've no idea, though this 1883 or 1884 photo has kids hanging out on Namsan (I'm quite certain that's Bugaksan, the mountain behind the Blue House in the background).

Matt, as an amateur (French) military historian I find the McKenzie photo of the Uibyeong intriguing. Particularly, I note several men wearing what appear to be fez. Some with the fez alone, common among French Senegalese troops, wome with the Fez wrapped by what appears to be a chechia, common among both senegalese and other French colonial and North African troops, and some wearing what appears to be a chechia alone or another form of turban. The center of attention is desked out in a greatcoat that might be Japanese or Russian. One of the cartridge belts appears to be US Army 1890's style. One man with a Korean style topknot, but topknots were common throughout Asia at that time. I wonder if we have any specialists out there who might be cognizant of the male headgear common to Korea in the early 1900s. Or, could the Uibyeong have included Chinese boxers who might have picked up these items while fighting the multi-national force that relieved Beijing in 1900? If so, perhaps a sign of future cooperation similar to the NEAJUA of the 1930s?

Lirelou - Interesting; I never really looked closely at their clothes, so you've really provided something to think about. At first thought, I might doubt that Boxers were involved, but then who really knows? I'm not certain how much information on them exists in Korean, and McKenzie was the only foreigner to meet them in the field (I want to do a post on him at some point, because I have a lot of respect for him - though so many of the westerners travelling and working in Korea at the time led interesting lives). Other photos of the Uibyeong are mostly taken after their capture (though, as McKenzie relates, as in WWII, the Japanese didn't tend to take prisoners that often).

I think many of them had topknots, partly to rebel against the topknot cutting law - one man hired to accompany McKenzie feared he'd be killed by the Uibyeong if they found him without one. As for the fez - I wondered if it was a brimless horsehair hat, but as they were worn by the upper classes that wouldn't make sense.

Anyways, something to ponder.

Matt, the topknot was common to Indochina as well. Indochinese (Viet, Khmer, Lao, Tho, Muong, Nung, and southern Montagnards) troops recruited by the French retained it up until the First World War, and there was great resentment at having to cut it then. What eased the transition was the the revolutionaries in both China and Indochina were advocating doing away with the topknot as a step towards modernization. Photos of that period on Kimsoft's site suggest that Korean revolutionaries did the same.

Lirelou, from what I've been reading, there were many Koreans of a modernizing bent which supported the idea of cutting topknots, but when the King called for people to cut them, a number of supporters of the 'confucianist old style' raised their voices against it, and it would seem many of the Uibyeong were of the same opinion. This is, however, coming from Mckenzie as a source only. Perhaps other sources have more to say on the matter.